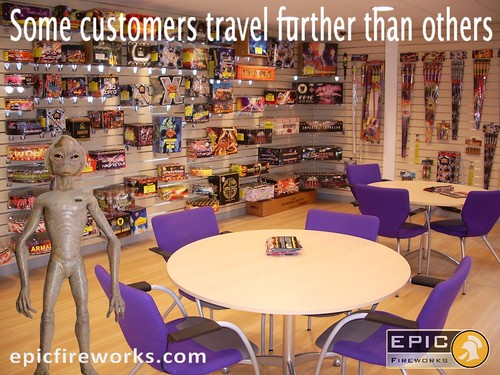 Over the past few decades it seems that whenever we have a celebration, be it New Year’s Eve, Bonfire Night, Independence Day or any other fireworks show, it seems we have uninvited spectators. Google “UFO fireworks” and you will find over 70,000 videos of strange lights, symmetrical formations of unexplained objects hovering above the bigger displays, aerial vehicles that defy our current level of flight capability have been filmed thousands of times.

Although a lot of these images have been attributed to sky lanterns, military aircraft testing, weather balloons, atmospheric anomalies, not all can be explained and remain to this day a mystery.

As technology moves forward, just about everyone now carries a camera phone which can also capture high-quality video, so there is no surprise that reports of these unknown strange events are on the increase. Whether you believe or not, the facts remain the same.

Recently the NASA Curiosity rover exploring Mars found irrefutable evidence that Mars once supported some form of life. Deposits of sulphur, nitrogen, hydrogen, oxygen, phosphorus, carbon, oxidisation, liquid water, all the building blocks of life have been discovered along with a suggestion that Mars once had an atmosphere similar to ours here on earth some 4 billion years ago.

With an approximate 400 billion stars in our galaxy and 18,000 planets suspected of sustaining some form of life the chances of us being alone are slim. When you look a little further out you would find an estimated 125 billion galaxies in our universe, consider the laws of averages and most people would have to agree that we are not alone.
Professor Stephen Hawking eminent physicist, cosmologist and possibly the world’s best-known living scientist agrees that the figures stack up and the chances of us being the only intelligent race in the universe would be thousands of billions to one against.

So what is it about fireworks which appear to intrigue our would-be visitors? Well, I would say it is the same thing that fascinates us, humans. Since fireworks where accidentally discovered by a Chinese monk named Li Tian some two thousand years ago, we have marvelled at the spectacle of a few chemicals, mixed in very specific ratios to make the skies above bloom with colour and light, being used throughout history at some of the most memorable occasions.

If you have ever been lucky enough to fire a big show, the adrenaline buzz of being around all the pyro is somewhat addictive and explains why we as a race are happy to jump out of aeroplanes with a piece of silk to slow our descent, why people race across the globe in boats putting themselves in mortal danger just for the buzz of being the best, the fastest, the highest. We as a race crave the buzz that fireworks give us, which explains why fireworks are usually named to reflect this. Bomb, adrenaline, buzz, devastation, appear across the world in thousands of firework company’s stock lists.

As for the question “are we alone” only time will tell.

Anyone wanting a quick adrenaline fix, just give us a call, with the largest selection of fireworks and rockets in the UK we have something for everyone be it quiet pretty colours or massive loud bursts of noise.

Here are a few videos, make up your own mind.

The 2012 Olympic Opening Ceremony was watched by a staggering estimated one billion people whilst some it would seem had their eyes trained elsewhere.

There have been literally hundreds of sightings of the UFO seen by some on Sky News and other media outlets. However exciting Danny Boyle’s Olympic Opening Ceremony may have been, I for one very much doubt that the little green men would have travelled multiples of millions of miles across the universe in order to come to London to see the fireworks now do you?

However unlikely the visit from outer space may be to Joe normal in the street, there is an increasingly large number of ‘experts’, trying to convince the World and its mother otherwise.

The spacecraft was actually a Goodyear Blimp that had been in the air for most of the week before in and around London and the Boroughs so no surprises there. The footage of the space ship was initially posted onto YouTube by Mr Scipher which has since set off this global phenomenon. There was a ‘prediction’ by one of the UK’s most prominent UFO experts, Nick Pope, who had said that the 2012 Olympics could attract extraterrestrial visitors who want to reveal their presence to mankind. Of course the more sceptical of us might think why in gods name are the ET’s interested in the slightest in our sporting achievements or indeed about making it onto the World Stage.

According to the National Press, Downing Street has already shown a limited interest in all things UFO but maintained that they want to be kept in the loop following a number of accusations that there are matters being kept from the general populace in relation to sightings, resulting in demands to make any ‘evidence’ documented be made available.

There is one thing for certain, the London Olympics 2012 will certainly earn the distinction of the greatest show in the history of mankind if it turns out that alien tourists showed up for the opening ceremony!! And if it is not a Goodyear blimp, then London Olympics 2012 may rank in the archives of UFO history along with the Roswell sighting.

Yes, conclusive proof if ever it were needed that ET, aliens and little green men love fireworks, and why wouldn’t they. If you had travelled millions of light years across the universe to discover new civilisations and lifeforms damn right you deserve to relax for a while and watch fireworks. Indeed many theorists (with a lot of time on their hands) reckon that it is the fireworks that draw them here.

“From the depths of space, the aliens can use their super-telescopes to focus in on what is happening on the surfaces of distant planets. Upon seeing the dramatic fireworks displays that we humans have most days of the year here on earth, the aliens are inspired to make a detour and pop in to see what all the colourful lights are about. Somewhat similar to us pulling off the motorway to stop at a McDonalds when we see their golden arches logo. Only last week a fleet of UFOs was spotted hovering above Cardiff in Wales. It was only when they have seen the petrol prices at a garage forecourt that they choose not to stop”

Whatever it is in this video, it is an amusing way to spend a few minutes of your day. Enjoy!