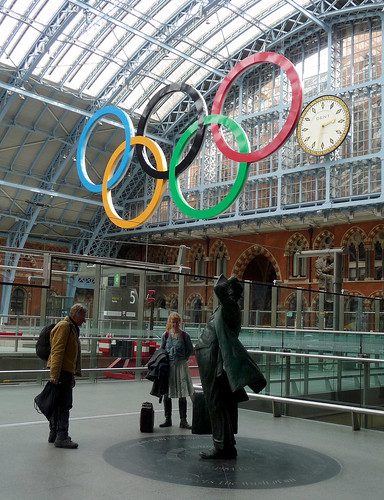 There is no such thing as a “daft” question when talking fireworks. With over twenty years in the industry, we have probably heard them all. We like to think there isn’t much we at Epic don’t know about the subject, however, we were recently asked if anyone has ever managed to perfect a firework (either a barrage, cake or shell) that accurately creates the “Olympic Rings”. The answer is NO, not yet.

The difficulty is a few fold, firstly as you can see from the picture one of the rings is black, not the best colour to have in a nighttime firework display.

The colours themselves are easy (although the black would cause a few headaches):
1st we have BLUE… copper compounds + chlorine producer copper acetoarsenite (,Cu3As2O3Cu(C2H3O2)2 = blue copper (I) chloride, CuCl = turquoise blue
2nd GOLD… incandescence of iron (with carbon), charcoal, or lampblack
3rd we have the GREEN… the element of choice here is barium compounds + chlorine producer
barium chloride, BaCl+ = bright green, remove the chlorine element for a green apple/yellowish green shade.
4th RED…strontium salts, lithium salts
lithium carbonate, Li2CO3 = red
strontium carbonate, SrCO3 = bright red
And finally, a black that shows up at night - answers on a postcard please or via e-mail.

The Chinese are undoubtedly the masters when it comes to creating all things pyro, but when it came to the 2008 Beijing Olympics, not one ring was seen.

The main difficulty comes when you look at the design of the rings. 5 intertwined rings, the separate effects known as “petals” would have to be constructed with each petal having a simultaneous burst charge, usually, black powder coated rice husks, throwing the “ring” a quite specific distance away to create the illusion of all five rings at the same time. Each ring would also have to be aligned with the other four to complete the finished item with some pretty complex geometry involved. As with a shell, it spins while it is reaching its predetermined burst height, the calculations I expect would give even Professor Steven Hawking something to think about (hope you enjoyed your epicfireworks if you are reading this Mr Hawking).

We were going to offer a prize to anyone who could successfully fire “the Olympic rings” with one fuse being lit. But, I’m sure there would be one bright spark (no pun intended) who would find a way around it, our customers were some of the most inventive people around (see our previous blogs on rocket racks etc.).

For now it looks like lasers will be the way ahead, but hopefully, in the near future, complex fireworks graphics will be commonplace, the sooner the better.

WHAT: THUNDER OVER LOUISVILLE 2023WHY: FIREWORKS AND AIRSHOW EVENTWHEN: SATURDAY 22nd APRIL 2023WHERE: LOUISVILLE, KE...
Read More
Filed in: Fireworks, olympic rings
Share:
Find us on Facebook Find us on Twitter Find us on Pinterest Find us on Instagram Find us on Tumblr Find us on Vimeo Find us on Youtube Find us on LinkedIn Find us on Flickr
Previous article SOUTHEND’S FIREWORK DISPLAY IS TO MAKE A COMEBACK THIS YEAR!