How are fireworks made?

All these common products were invented accidentally!!

It is believed that around 2000 years ago a Chinese monk named Li Tian was mixing up some commonly used kitchen items. Saltpetre, also known as potassium nitrate (created from purifying poop!!) charcoal or possibly sugar as the fuel and sulphur in very specific quantities were all combined. The Chinese people named “Huo Yao” or fire chemical. This mixture became the basis for gun or black powder and hasn’t changed since and is still used today as a lift or burst charge for the “stars”.

Marco Polo was the first European to witness this new advance and immediately saw its potential passing it onto the crusaders in Europe to bring back over to the UK. 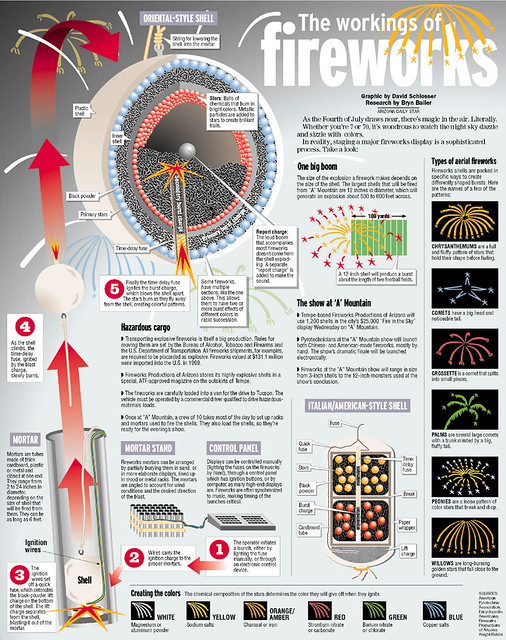 Roger Bacon, another monk and noted 13th-century alchemist first looked into the composition and concluded that the elements had very specific purposes. He concluded that charcoal or sugar was used as the fuel to enable the burn to take place, while saltpetre works as an oxidiser removing electrons from the equation, sulphur sits on the fence as a binder slowing down the nitrates reaction.

Add to this the holy grail for the passionate pyro professional …. FLASH POWDER. Flash powder burns at a much faster rate than black powder and is more common these days being added to the mix in the early 1900s and was used initially in ‘flash’ photography. The rules in relation to flash are simple, the more you use the faster the reaction. This may be a good time to mention that 1.3g fireworks can contain up to 25% flash powder whereas 1.4g only contains up to 5%. Ergo 1.3g is up to five times better. Add to the mix a few chemicals to give you some colour, Barium will give you a nice green starburst, where strontium will produce a vivid cherry red.

The stars (or to the non-pyro-head the effects) are made by combining the black powder with other elements, originally formed as a sort of slurry, they are then heated up to in some cases boiling point, then the additional chemicals to produce the different effects are added. This mix is then dried out and milled into balls or cut it cubes (think of an OXO cube and you are not far off). Pack the stars in a coat of black powder coated rice husks, pack tightly into a tube or shell casing and hey presto you have a firework.

Since the early 1500’s fireworks have been used to celebrate Royal weddings, birthdays, coronations and New Year (in fact any occasion you can possibly imagine has at some point been celebrated with fireworks) all from a relatively simple chemical reaction.

WHAT: Flamborough Fire FestivalWHY: New Year CelebrationsWHERE: The Festival Arena is situated at Mereside, Flamborou...
Read More
Filed in: Explosive material, Flash powder, gunpowder, how fireworks work
Share:
Find us on Facebook Find us on Twitter Find us on Pinterest Find us on Instagram Find us on Tumblr Find us on Vimeo Find us on Youtube Find us on LinkedIn Find us on Flickr
Previous article FIREWORKS CHAMPIONS AT NEWBY HALL