Where the different colors of fireworks come from? 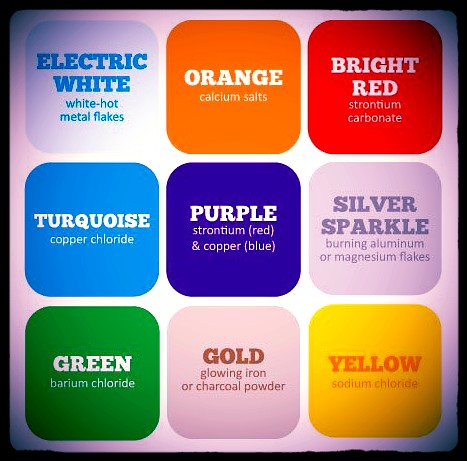 Colours Of The Rainbow – Created In A Chemistry Lab!!

As a young child, I was always fascinated by fireworks but as my main interest was in all things medical, I was not in the Chemistry crew and therefore much of my knowledge about fireworks has come from researching the subject for my job.

There is a little bit of all of us that has that two-year-old child inside us shouting out ‘but why?’ or ‘but how do they do that’ and here are my attempts to take the mystery out of the colours in fireworks today.

Many of you may know that fireworks were first discovered in China many hundreds of years ago by pure accident. As the good people of China all cooked on open fires way back in time, every time anything was spilt onto the coals, the effects of heat and fire would become apparent. In the first instance, it is said that a cook in the first century accidentally combined charcoal, sulphur and salt peter (potassium nitrate - which was a common ingredient in the curing of meats particularly salt beef and pork for bacon) and the resulting mini explosion caused some interest and so began the history of fireworks and the continuing fascination.

Of course, Chinese medicine has always included some strange and often powerful chemicals commonly found in the home so it was not unheard of for people to use them in cooking, inadvertently or otherwise.

Over the years, there has been little change in regards to the chemicals utilised to create the colours and here are the most commonly used:

WHAT: Flamborough Fire FestivalWHY: New Year CelebrationsWHERE: The Festival Arena is situated at Mereside, Flamborou...
Read More
Filed in: different colors, firework colours, Fireworks
Share:
Find us on Facebook Find us on Twitter Find us on Pinterest Find us on Instagram Find us on Tumblr Find us on Vimeo Find us on Youtube Find us on LinkedIn Find us on Flickr
Previous article TOP 5 HALLOWEEN FIREWORKS