WHAT: THE WORLD’S MOST DANGEROUS FIREWORK FESTIVAL
WHY: PYROTECHNIC BASED CELEBRATION
WHEN: THURSDAY 1st MARCH AND FRIDAY 2nd MARCH 2018
WHERE: YANSHUI DISTRICT, TAINAN, TAIWAN

Named as one of the most dangerous fireworks festivals in the world this even is certainly not for the faint-hearted. The Yanshui beehive fireworks festival runs alongside the lantern festival it is believed that it originates from the early 1800’s.

Sadly, the whole of Asia was deep in a Cholera pandemic for almost 20 years and the locals would pray and ask the Chinese god of war, Guan Gong, to visit the town to help them get rid of this terrible disease. To welcome the god, the locals added firecrackers to the lantern releases and following the offering, the disease subsided; and the town now continues this tradition to make sure that no harm returns to the village in the future.

Firecrackers have now been replaced by the beehives which can contain anything from a few to several hundred thousand fireworks and can cost tens of thousands of pounds, but to the locals, it just means that they will have masses of good luck for the coming year. 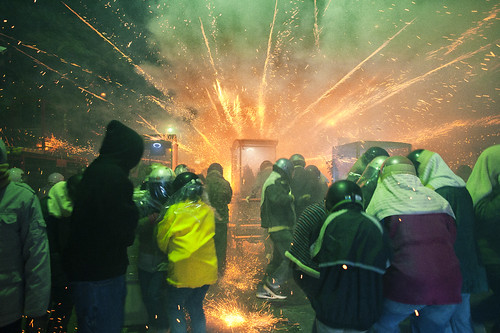 After the lanterns are set alight and cover the night sky, palanquins each parade a holy figure around the town and the beehives follow shortly after having been strategically positioned every few yards along the parade route.

Inching through the towns and villages everyone huddles alongside the beehives marking every inch of where the parade has been. It may look as if the area has been invaded by aliens from another galaxy as the local’s don motorcycle helmets, non-flammable clothing, gloves, scarves making sure not to leave an inch of flesh exposed. Filled with both excitement and anticipation the last get into place before the siren wails to warn anyone with 2nd thoughts about partaking in the event.

Once lit the beehives go off within seconds like a swarm of bees the lights, flashes, bangs and screams fill the air and floor shooting in every direction. Bouncing from helmets, and other parts of the body some of the balconies surrounding the area throw fireworks from them going into the 1000’s of people in the crowds contributing to the mayhem happening below. If you look closely you may find a religious few that face the fireworks with only a loin cloth for protection. In a couple of minutes, the mayhem comes to a stop and every one them looks skyward for the epic fireworks display to bringing an end to the evening.

If you are thinking of going and participating in this event yourself there 1st night of the beehive festival is normally held for the locals and it’s the second night that tourist can attend.

Don’t worry if you don’t have the appropriate clothing there are stalls and shops galore selling everything you need to cover yourself. Just remember not to duck if you can help it, the more that hits you the better the luck you will get in the forthcoming year.

A hidden gem of a game is available on Steam for PC. If you are a fan of Pyro, and want to put on crazy, funny, intri...
Read More
Filed in: 2018, beehive, fireworks festival, Tainan, Taiwan, Yanshui, Yanshui Beehive
Share:
Find us on Facebook Find us on Twitter Find us on Pinterest Find us on Instagram Find us on Tumblr Find us on Vimeo Find us on Youtube Find us on LinkedIn Find us on Flickr
Previous article FIREWORKS CHAMPIONS AT NEWBY HALL