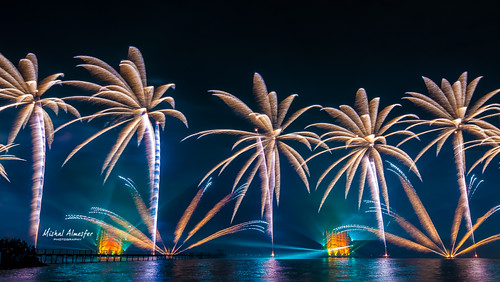 Back on 20th November 2008, American pyro specialists Fireworks by Grucci were commissioned to create the display to beat all displays for the celebrations to make the opening of the Atlantis and the Palm Jumeriah in Dubai.

It was set to be the biggest and most challenging display ever undertaken.

The Hotel and resort was built on reclaimed land which created its ‘island resort’ feel. Based on the mythological Atlantis with some distinct Arabian features added for good measure the place is nothing short of HUGE. It has 1500 guest rooms ranging from your basic opulent family suite to underwater suites which look directly into the Ambassador Lagoon, an 11 million litre marine habitat which houses 65,000 fish. It almost represents the view you would expect in Atlantis. With 20 restaurants and a huge water-park (naturally) it is spectacular.

The opening ceremony was months in the planning and the guest list contained so many A-list celebrities it must have been difficult to know where to gawp first especially when they were treated to a performance by the lovely Kylie Minogue.

The firework display took a team of 250 pyro technicians two weeks to set up and the result was billed as ‘the largest fireworks display of all time’.

To give you an idea of the sheer scale of this ‘super display’, consider these points:

Regrettably, as good as it was, in Kuwait 2012 they outdid their neighbours in Dubai in celebration of the Golden Jubilee of its constitution, they spent a staggering $15,000,000 on the 77,282 fireworks which were fired by the fantastic Parente Fireworks. The display lasted almost an hour. The result was that they achieved the new Guinness World Record for the biggest display.

Personally, I fail to see the comparison between the two as the Atlantis display was far more technical and more artistic than the Kuwait one but however you feel about them, they were both brilliant and lets face it, the door is open now for the next mega hotel opening or jubilee event in the UAE to out-do the ‘Jones’s’ so treating us to another magnificent and powerful firework display.

A hidden gem of a game is available on Steam for PC. If you are a fan of Pyro, and want to put on crazy, funny, intri...
Read More
Filed in: firework, Fireworks, parente fireworks, world record, World Record Fireworks
Share:
Find us on Facebook Find us on Twitter Find us on Pinterest Find us on Instagram Find us on Tumblr Find us on Vimeo Find us on Youtube Find us on LinkedIn Find us on Flickr
Previous article INSTANTLY LIGHTING OVER 10 KILOS OF EPIC FIREWORKS