YouTuber and top pyro fan Jimmy Whizz has recently celebrated the milestone of 300 subscribers to his YouTube channel with a mass firing of Triple whistle's from Epic Fireworks. 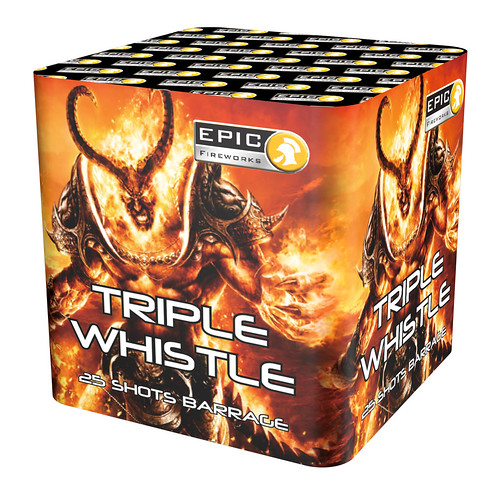 Jimmy, who has been a regular customer with Epic for over 10 years said "My love for fireworks has been around long before social media became so big. A few years back I started sharing my hobby with a couple of videos on YouTube and I've been pleasantly surprised by the amount of like minded firework fans out there and it has led to some great friendships.

I can remember when I first stepped foot in epic fireworks showroom and being bowled over by the size and product range. Slowly I have been going through the range of fireworks over the years and still plenty more to go!

I fondly remember some of Epic's Older pieces like Imperial Invasion which went down a treat at my bonfire night display and left people talking about as the addition of hummers to a finale firework was unique. Since then the range has expanded massively and with the regulation changes a few years ago the quality and imagination put into new fireworks has only improved.

I'd like to thank everyone at Epic and with this video of a mass firing of Triple whistle's, I hope it puts a smile people's faces during these uncertain times."

Please show Jimmy Whizz your support and check out his channel.

Qatar is the first middle eastern country to host the world cup, which was opened in spectacular style with a knock-y...
Read More
Filed in: triple whistle, WALL OF WHISTLES!
Share:
Find us on Facebook Find us on Twitter Find us on Pinterest Find us on Instagram Find us on Tumblr Find us on Vimeo Find us on Youtube Find us on LinkedIn Find us on Flickr
Previous article THE HISTORY OF SKY LANTERNS