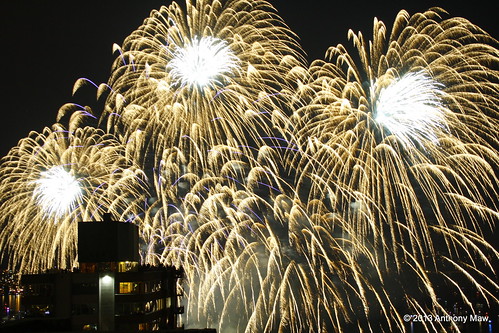 WHAT: The 2014 Honda Celebration of Light
WHERE: English Bay, Vancouver
WHEN: Between 26th July and 2nd August
COST: FREE
FIRING TIMES: 10.00pm

It is always the way of the people of Vancouver noting that summer is close by – the details of the fireworks competition are released and this year is no exception.

The Annual ‘Honda Celebration of Light’ takes place in late July/early August and this year features teams from the USA, Canada and France who will battle it out to be named as the winners of this prestigious title.

The event attracts almost half a million spectators annually over the three days and includes live music performances, food and beverage concessions and other family events during the run up to the fireworks.

This is not only the biggest firework event in Vancouver but the largest offshore event of its kind in the World. Check out the map below of the festival and try and get there early to pick the best viewing spots. 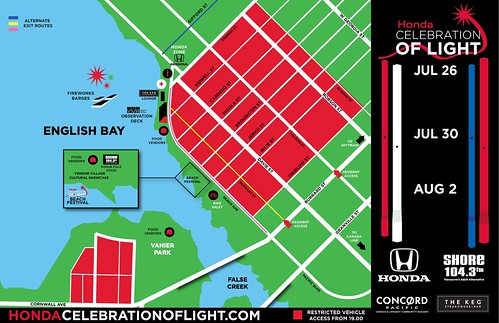 The fireworks start at 10:00pm and last in the region of around 25 minutes and the judges will be ensuring compliance with their five main areas:

1. General Concept – including presentation, structure and the scale of the display.
2. Colour – choice, variety, brightness and luminosity.
3. Originality – structure, architecture and the design of the display.
4. Quality of production – rhythm of the fireworks, volume of effects and the quality of construction.
5. Correlation of music – the choice, synchronicity and adaptation to the choices of music and the reflection of the ‘mood’ of the display.

Although the fireworks will not get underway until 10:00pm, there is a full programme of events beginning from 2:00pm on each of the display dates for all the family to enjoy including a number of cultural events. One of these is the Concord Seawall Challenge which is described as an urban adventure, designed to raise funding for after school programmes across the City and its districts. The first two winning teams in this challenge win $1500.00 each and they also get the chance to nominate a local mainland school each to receive a $5000.00 award.

Certain to be one of the most beautiful sky filling events of the Canadian calendar, get along and see what it's all about as outside of New Year or Bonfire, we get very little chance to see fireworks on this scale at any time. Check out the video below from 2013 :)