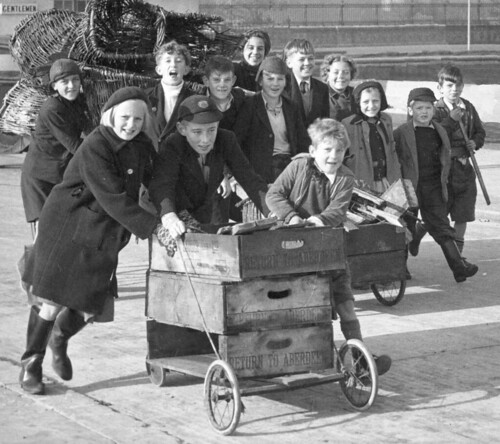 Yes kids, believe it or not, young people had to work for their entertainment in the olden days.

Above you can see a group of rosy-cheeked youngsters out collecting firewood for their bonfire. In those days the bonfire was just as important as the fireworks and it was a matter of pride to ensure that your street/village/club had a bigger bonfire than your local rivals. It was not uncommon for young wags (wag meaning something different in those days, not the wife or girlfriend of a footballer) to sneak out to light the bonfire of their "enemies" the night before bonfire night, leaving them with a pile of ashes rather than a big pile of wood.

Such acts often met similar retaliation and this could mean that no-one had a bonfire come the big night. Such is the nature of man.

We must only hope that these barrels did not contain anything flammable. Can you imagine a group of kids doing something like this nowadays? No, you can't, because health and safety would have a fit, saying such things as:

"Climbing on top of a pile of wood, terribly unsafe."

"Those barrels could slip and fall at any time."

"This is an outrage."

and other such mutterings.

However, surely these are rights of passage for a young lad and made them appreciate their hard work when they see the flames licking up from their bonfire heap and think "I made that". This is something that is sadly lacking in today's culture. The kids would much rather sit and play their new computer game "bonfire builder 4: The finding of the pallet"

It was common in the good old days for everyone to get rid of all their old crap during the bonfire season. Anything that could burn would be thrown onto the pile. Busted old sofas, the obligatory smelly urine stained mattress (when not occupying a skip), broken doors, piles of old tyres that would billow out thick black toxic smoke for days. Nothing was banned from being thrown on a fire, after all, our fire had to be bigger than their. Nowadays, of course, you cannot burn a piece of wood if it has a dot of paint on it as this will pollute our clean air.

We are all for clean air laws and would not condone burning anything that did not comply. But it did feel natural to launch practically any household item onto a fire, it was like a Spring cleaning, in Autumn and positively enforced community participation.

And this is what is missing today; Community participation. The image above shows people dancing gaily (that meant something different in the olden days too) sharing each others company and coming together in a spirit of community. This was back in the days when people knew their neighbours' forenames and surnames and spoke to each other more than just the morning nod as everyone jumps into their cars. Times were when a man felt like he belonged to street or town or village and did not just live there.

The bonfire was an integral part of this belonging, and like bonfire festivals and events that still go on around the world is a vital part of bringing people together. After all, many people still call it Bonfire Night.

What do you call the 5th of November?

The opening ceremony of the Winter Olympic Games has finally begun in Beijing, China.A beautiful firework display com...
Read More
Filed in: bonfire, Fireworks, history, Safety
Share:
Find us on Facebook Find us on Twitter Find us on Pinterest Find us on Instagram Find us on Tumblr Find us on Vimeo Find us on Youtube Find us on LinkedIn Find us on Flickr
Previous article EPIC VERSUS THE GLOBAL SHIPPING CRISIS