Southampton To Welcome The Red Arrows With Fireworks 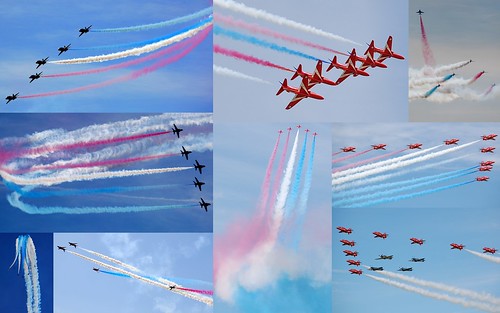 The world famous Red Arrows are to be an extra highlight to the Queens Diamond Jubilee Celebrations this year, with seven of their modified BAE Hawk T1 aircraft's.

On the 5th of June at what is expected to be the biggest event of its kind outside London, the Cunard Ships Queen Elizabeth, Queen Victoria and the Queen Mary II will take part in a staggering event.

The three Queens (as Cunard like to call them) all of which were named by Her Majesty will sail up the Solent surrounded by a flotilla of small ships and finally arrive to berth in Southampton docks.

The Red Arrows Display starting at 6pm is expected to last around 25 Minutes, and will centre around the Marchwood area of the docks.

After the aerial display the three ships will then leave the dock and make their way down the Solent, as darkness falls this will climax with a massive fireworks display, Mayflower park being the best vantage point for anyone wanting to witness these spectacular events. Good viewing is also available at Hythe Marina and Town Quay, and is expected to be a little quieter.

Please note there will be NO public parking around Mayflower Park, the use of city centre car parks is highly recommended.

Scheduled to be the 22nd running of the FIFA World Cup competition and for the first time in the events history, taki...
Read More
Filed in: Fireworks, Queen's Jubilee, Red Arrows, Southampton
Share:
Find us on Facebook Find us on Twitter Find us on Pinterest Find us on Instagram Find us on Tumblr Find us on Vimeo Find us on Youtube Find us on LinkedIn Find us on Flickr
Previous article BLACKPOOL WORLD FIREWORKS CHAMPIONSHIP