Sirotechnics Turning On The Christmas Lights 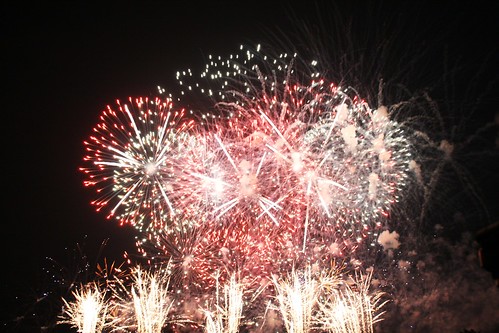 Have you ever wondered what it looks like to be about 5 Metres away from a professional fireworks display? Well at EPIC Fireworks we went behind the scenes to bring you this video from our friends at Sirotechnics Fireworks.

This display was to celebrate the town’s annual turning on of their Christmas lights. Each year Santa appears from a shop window, travels down a ladder and presses a big red button to start the show.

The fireworks are fired from a car-park behind the row of shops giving an all aerial display with effects ranging from 14mm cakes through to 75mm star shells. Due to the height required to clear the buildings, we are very selective over the products used to achieve a minimum of 40 metres in height before they unleash the effects.

This video shows the awesome power that fireworks contain. The show was fired wirelessly using the cobra firing system. Many of the items were fired in pairs to maximise effect, whilst the calibre of the items increased throughout the show until the 3” Titanium salutes closed the show.

The fireworks were matched with Christmas music – often referred to as a pyromusical. On some occasions pyromusicals will provide entertainment with explosions on the beat, at others it may be a show with pairing of the music to the fireworks rather than completely synchronised. Your display operator will be able to tell you which option matches your budget best.

Sit back, full screen it and watch it how we see a display at ground zero!!

This display was fired by our friends at Sirotechnics Fireworks. They are available for wedding fireworks, corporate displays and any other occasion you can think of!

A hidden gem of a game is available on Steam for PC. If you are a fan of Pyro, and want to put on crazy, funny, intri...
Read More
Filed in: Sirotechnics Fireworks.
Share:
Find us on Facebook Find us on Twitter Find us on Pinterest Find us on Instagram Find us on Tumblr Find us on Vimeo Find us on Youtube Find us on LinkedIn Find us on Flickr
Previous article THE HISTORY OF SKY LANTERNS