The Scarlet Sails event is also known as Alye Parusa and is one of the Summer’s most popular events in the City of St Petersburg.

The event started in the 1950s to mark the end of the scholastic year in Russia and is to celebrate the transition into adulthood.

Red Sails or Scarlet Sails is held on the banks of the River Neva and although it experienced a loss of popularity from 1979 to 2005, it has grown massively over the last couple of years into something which today attracts visitors from across the World. 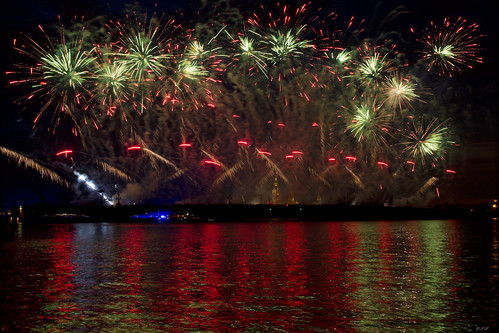 The ‘ship’ is the main symbol of the Scarlet Sails event and it is a Swedish Brig called The Kronor and was influenced by the book of the same name by the early 20th century novelist Alexander Grin who’s book was a tale of a young girl who is from a fishing family with limited prospects and holds dreams of being able to see the world one day. She is told by a wizard that a ship with beautiful red sails will come and take her to a better life. A nobleman’s son visits the fishing village and falls in love with her from a distance and she sails away to a better life.

The Scarlet Sails festival incorporates open-air theatrical and musical performances on outdoor stages in the centre of Palace Square in St Petersburg.

Waterfalls, comets, aerial and aquatic shells come together to create a stunning display for all to enjoy. Check out last year’s event: