Not quite on a par with the winter festival in Harbin, China but this is a lovely little event to beat the winter blues before Spring arrives over in the USA.

The small town of Saranac Lake is home to just over 5000 residents, but they enjoy and celebrate the winter with fireworks and all the fun to be had at this time of the year, particularly in a town which can expect snowfall to reach over 102 inches per year!! It was voted as the best small town in the New York State area and is ranked 11th in the whole of America.

The town was first settled in 1819 by a family from New Hampshire who built a logging facility, dam and sawmill becoming a logging community over time and it was almost 19 years later that the first school was built and then another 9 years later, the first hotel was erected and the rest they say is history. 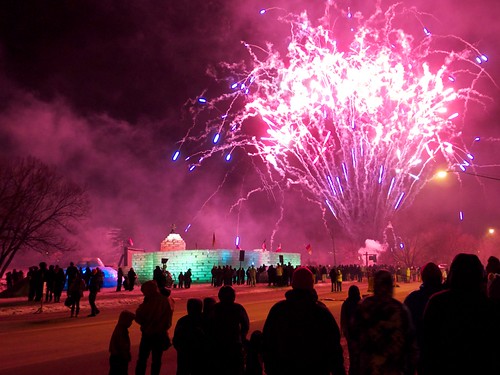 At the beginning of the 19th century, the biggest killer was Tuberculosis which took the lives of almost 20% of the recorded deaths across the globe. One of the few things to help in the fight against this disease was to take the stricken to areas in the mountains to help them with a balanced rich diet and some clean air to enable them to fight off the disease themselves. The first such Sanitarium in the US was built here by Dr. Livingston Trudeau in 1885.

Today, the people gather to celebrate winter with lots of winter based sports like skiing, curling, inner tube racing (for all the family), snow rugby, ice skating and all manner of snowshoe related events to boot.

The event has been run by locals since 1897 and the carnival features a huge ice palace, parades, and sporting competitions, live musical and theatrical performances, torch-lit skiing and three firework displays.

The ice castle is brightly lit and the ice sculptures glisten with the fireworks breaking overhead – simply BEAUTIFUL.

Scheduled to be the 22nd running of the FIFA World Cup competition and for the first time in the events history, taki...
Read More
Filed in: 2018, firework display, SARANAC LAKE WINTER CARNIVAL
Share:
Find us on Facebook Find us on Twitter Find us on Pinterest Find us on Instagram Find us on Tumblr Find us on Vimeo Find us on Youtube Find us on LinkedIn Find us on Flickr
Previous article TAMWORTH FIREWORK DISPLAY BACK WITH A BANG