WHAT: HARBIN ICE FESTIVAL 2018
WHY: ICE/SNOW SCULPTURE FESTIVAL
WHERE: HARBIN, CHINA
WHEN: OPEN NOW BUT OFFICIAL DATE IS 5TH JANUARY 2018

2018 marks the 34th annual Harbin Ice and Snow Festival in China’s Heilongjiang Province and it continues to get bigger and better year on year as the best in the world in the fascinating art of Ice and Snow sculpture, get to display their wares.

5th January sees the official opening event and you can expect to see the beautiful fireworks breaking over the illuminated Ice City which is a stunning sight to see. Being in China of course, the pyro is absolutely outstanding and again continues to thrill young and old alike.

The ‘theme’ this year is ‘Ice Snow Blooming Garden, Fantastic World’ which will feature live theatrical performances, ice and snow amusement world and of course FIREWORKS. 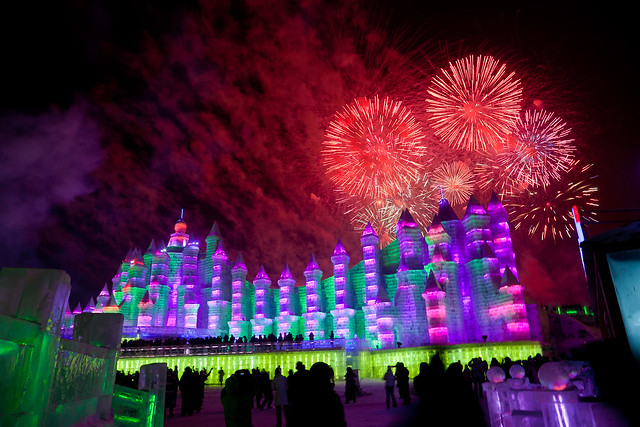 The sculptures represent everything from architectural wonders both from China and the rest of the World to whimsical snow fairies and snow maidens, dragons and all manner of other animals.

The people of Harbin are a hardy lot but given that they are only 200km from the Arctic Circle, it is no surprise that the temperatures in the winter here drop to -30 degrees centigrade but at the moment, it is a clement -21 degrees (lol).

The original Snow and Ice Festival began in 1963 and has continued to grow in both size and popularity ever since. The ice blocks are cut in chunks from the Songhua River and around 180,00 cubic meters of it are used to create ice castles and even the Kremlin to exacting detail.

The event which pulls in 1 million visitors annually is not for the feint hearted nor indeed for anyone with an aversion to the colder temperatures but this enchanting event is firmly on my bucket list.

Opening tomorrow evening with a huge parade followed by fireworks here is a look at last year’s event.

The international Ignis Brunensis fireworks competition hosted this year by ROCK FEST, is to be held in June in Brno,...
Read More
Filed in: 2018, Fireworks, Harbin, HARBIN ICE FESTIVAL 2018, ice festival
Share:
Find us on Facebook Find us on Twitter Find us on Pinterest Find us on Instagram Find us on Tumblr Find us on Vimeo Find us on Youtube Find us on LinkedIn Find us on Flickr
Previous article TONEGAWA FIREWORKS FESTIVAL 2022