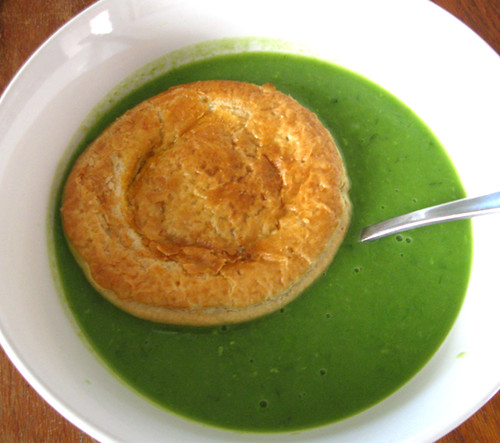 Epic customers have a number of ideas about what to have for Bonfire Night Fayre and we have previously featured our own recipe’s for a warming winter soup and dumplings and a really tasty chilli con carne.

This week we can do a Yorkshire Favourite, Pie and Peas. The pie has to be meat and potato and the peas have to be mushy with a rich steak gravy and mint sauce lathered over …. Mmmmm

Heat the oil in a large pan, add the meat and brown. Add the onion and fry until softened. Add the stock cubes, Worcester sauce and tomato puree if desired and water to cover (approximately 1 ½ litres). Continue to cook over a low heat until the meat is tender. There is only one rule with cooking meat for this pie, if it isn't dropping to bits when you touch it with a fork, it aint ready. Part boil potatoes in salted water until they are almost ready and then drain and leave to cool slightly.

Once the meat is cooked, add the cornflour or gravy granules to thicken the gravy slightly. Let it stand for a while.

Put the flour, lard, margarine and salt into a bowl and rub until it resembles breadcrumbs. Add cold water until the pastry comes together and wrap and refrigerate until the meat and potato fillings have cooled a little.

When cool, remove some of the gravy and retain for later. Combine the meat and potatoes and transfer into a large oven proof dish. Roll out the cooled pastry make a couple of slits to allow steam to escape and cover the pie filling.

Now, if you have made a pie before, you should ‘knock up’ the edges. This means making the pattern. If you are a complete novice, I would recommend you go around the edge with a fork or go round with your thumbs, gently pressing together as you go around. Brush the top of the pie with egg wash or milk and cook at 210 degrees or gas mark 6 for approximately 40 minutes or until golden brown.

Serve with mushy peas and the gravy retained from earlier with either mint sauce or for those of you in Sheffield and Barnsley, Yorkshire Relish.

Combine flour, oats, baking powder and ginger in a bowl. Leave to one side.

Put butter, sugar, treacle, golden syrup in a pan and heat until it resembles a dark fudge sauce. Add this to the dry ingredients that you have already set aside and combine the egg and milk and stir all together. Put this into a greased tin (approx 12x6 inches) and cook at 275 F or 140C or Gas Mark 1 for 90 minutes

This Parkin Recipe is easy to make and creates a moist sticky cake. However, you will need to store the cake for a week before eating allowing it to mature and release its stickiness. Cut into small squares and serve ……Delicious.

And now, the pyro to set your bonfire night off with a bang …. The premium pack from ourselves and without a doubt one of our biggest sellers for under £100.00 is the Guidos Pack:

A total of 91 fireworks and goods to the value of £302.38 makes this excellent value for money.

So if you live anywhere in the area, from Greater Manchester to Grimsby and Grimethorpe to Glossop, come along to see us in store.

With prices from just 36p for a pack of superb sparklers to £2000 for the magical Ultimate Bonfire, we have something for everyone. Open 7-days a week between 9.00am and 5.00pm and easily reached either via the picturesque Woodhead Pass from Manchester or the West of England or the M1 junction 36 from anywhere else in the country, we are easy to get to.

Every year around the world, people gather to watch the clock tick over from 11:59pm on December 31st, to 12:00am on ...
Read More
Filed in: Fireworks, food, Recipes
Share:
Find us on Facebook Find us on Twitter Find us on Pinterest Find us on Instagram Find us on Tumblr Find us on Vimeo Find us on Youtube Find us on LinkedIn Find us on Flickr
Previous article TOP 5 HALLOWEEN FIREWORKS