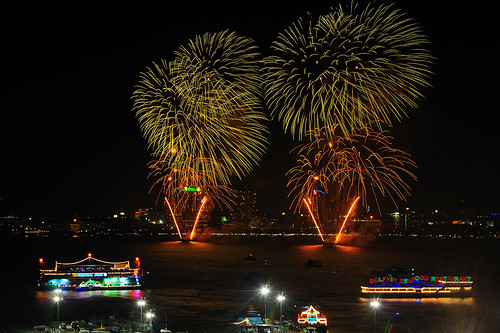 This popular festival, which was originally designed as a 2-year competition to honour their Royal Family back in 2009 was funded by the Government and the Ministry of Defence. However, once funding was removed, sadly the Thai team didn’t have the financial backing to compete more recently but thanks to the popularity of the event as a whole and the setting for the event have drawn countries back time after time so they continue to reap the financial benefits of holding a fireworks spectacular of this size stimulating the economy of Pattaya and Chonburi province.

The competition, held over two nights beginning this evening concludes on Saturday. The fireworks will be set up with the sea and the beautiful beaches as a backdrop. Each of the competing teams will have to come up with a 45-minute, musically choreographed show which will set hearts racing. They have to show their skills in combining colours and fireworks effects to get the best of the oohhs and aahhhs available.

The fireworks will be nothing short of spectacular as you might expect but there are a number of other events being held including:

Whatever the outcome, I am sure that they will be absolutely fantastic and we wish them all the best of luck.