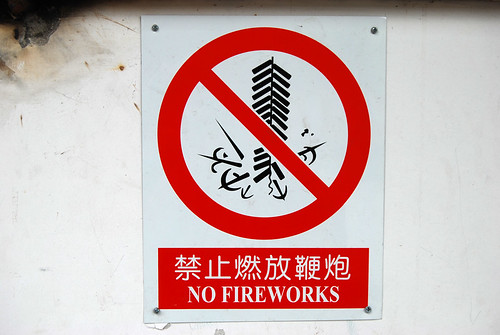 The last thing you want to see no matter where you are, least of all when you are in China!

This sign is a summer palace somewhere in the huge country of China. The owners of the place clearly have something against the use of fireworks. Shocking. Well not everyone can like them I suppose, but to put up a sign prohibiting their use. Its a step too far.

Other than the fact that is telling us that we cannot use fireworks it is a cool sign. It also shows clearly what the Chinese idea of a firework is, in this case, a firecracker. Which got us thinking. Imagine the worst was to happen in this country and fireworks were to be banned or forbidden in certain places. What kind of signage would be used? Since firecrackers are already banned here it would be pretty pointless to use the same sign as the Chinese.

We have to presume it would be a red circle with a red line through whatever is inside it, but what would be inside it? a fountain? Perhaps not, as this could be confused with the traditional "no wizards" sign.

How about a sparkler then? Well, again this could be confused with a magic wand and with today's obsessive love of Harry Potter it could be a dangerous road to go down. A Catherine Wheel would be no good as it might very well be mistaken for "no wheeled transport" which may cause no end of embarrassing pedestrian based misunderstandings. I see no option other than some kind of "no rockets" sign, which may imply airborne fireworks only are disallowed.

So great people of Great Britain (and anywhere else in the world) what would you do? Tasked with the job of designing the signing that would cast despair into the hearts of millions, how would you do it?

Answers on a postcard, please.

There is nothing more spectacular than watching a firework display which has been perfectly designed to music. That s...
Read More
Filed in: china, Firecracker, firework
Share:
Find us on Facebook Find us on Twitter Find us on Pinterest Find us on Instagram Find us on Tumblr Find us on Vimeo Find us on Youtube Find us on LinkedIn Find us on Flickr
Previous article AUTUMN LIGHTS RETURNS!