FFF or Fast, Furious and Funny presenters Colin Furze and Alexandra Legouix head down to trackside to determine which is the faster: The Nissan GTR or a consumer rocket.

Both, of course, were very fast but on this occasion, the rocket gained a couple of feet to win the contest but not by as much of a margin as one would expect.

We previously featured a similar dilemma when Richard Hammond of Brainiac and Top Gear decided to check which was the faster between and golf ball, a rocket and a Honda Fireblade (1000cc motorbike).

Although once again the rocket won, the margin was relatively small once again.

I personally can't wait until someone comes up with a vehicle (road legal) which can beat the rocket. 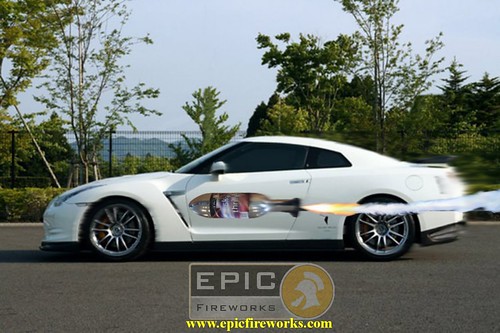 There is nothing more spectacular than watching a firework display which has been perfectly designed to music. That s...
Read More
Filed in: firework racing, firework rocket, Fireworks, Nissan GTR, rocket
Share:
Find us on Facebook Find us on Twitter Find us on Pinterest Find us on Instagram Find us on Tumblr Find us on Vimeo Find us on Youtube Find us on LinkedIn Find us on Flickr
Previous article SOUTHEND’S FIREWORK DISPLAY IS TO MAKE A COMEBACK THIS YEAR!