‘Firework Champions’ is the series of events held in historic or stately homes up and down the UK. Competitors within the field of professional pyrotechnics are being invited by organisers MLE Pyrotechnics to take part.

Competitors each create a 10-minute pyro-musical display (firework display choreographed to music) and take to the skies to show their prowess.

The material the teams use is not available to the general public and is often the first chance some find of seeing the highest quality of display fireworks outside of London on New Year’s Eve.

These events have featured on local and national news and the participants are indeed responsible for some of the most iconic fireworks in the UK including London’s New Year’s Eve, the Rugby, Football and Olympic events and you get to be up close and personal with some of the most experienced in the business in an incredible setting. 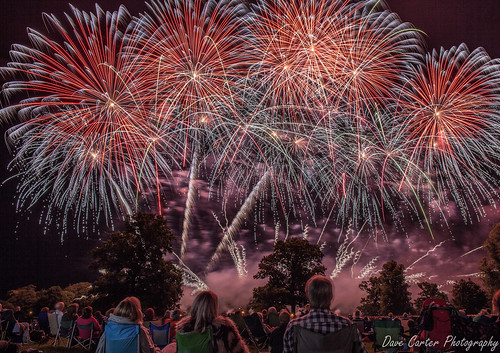 Newby Hall is a 17th-century historic building that has been in the family for numerous generations and like all notable structures of its kind, has a sad and poignant tale within. The owner of the house in the late 17th Century was Lord Grantham, Thomas Weddell. His daughter married Henry Vyner and they had a son, Fredrick who on reaching adulthood, went travelling around the World (as most of his contemporaries would have done). Sadly, the trip came to a very sad end when Fredrick was killed whilst in Greece which his poor mother never quite got over and she had a gothic style church built in the gardens to commemorate his life in the midst of 25 acres of gardens and open space.

In 2019, Newby Hall Gardens was crowned the winner of the prestigious Historic Houses Garden of the Year award beating off some of the finest in the Country. In fact, one of the seven finalists in 2019 is one of the other venues for Firework Champions – Belvoir Castle. The house has been featured in Peaky Blinders and has been widely used both indoors and out as it has doubled up as Buckingham Palace and Kensington Palace for film and TV production and continues to be used for both filming purposes and of course by the tens of thousands who go along to see the house and gardens annually.

Competing here at Newby this year are as follows:

This teamwork with everything from small bespoke wedding displays to huge corporate and public events in capacity stadiums. They competed at Newby last year but were narrowly beaten to the trophy by Illusion Fireworks but this year, they have one or two surprises and new pieces to try out so it will be brilliant – watch this space!

Responsible for the beautiful fireworks at the proms in the park at Pontefract Castle for the last couple of years in addition to an order book full of events. Narrowly beaten 2018 to the win here at Newby Hall they are planning to bring it. Expect big, bold and beautiful.

Relative newcomers to the industry as a whole, their members are busy all year round with everything from competition to baby ballroom events. Winners at their first attempt in the Firework Champions series in 2017 at Eastnor Castle as a last-minute replacement, they were absolutely outstanding and showed their incredible prowess in the sky once again last year when they took part in the event at Arley Hall.

This is an exciting opportunity to get out into the fresh air, enjoy time with your family away from the trappings of everyday life and sit back and watch in wonder as night draws into a sky full of fireworks that will stay with you forever.

This is determined by audience vote so make your feelings clear as each person gets to place their votes and whilst the counting takes place, organisers MLE Pyrotechnics will put on a memorable celebration display to cap the night off beautifully.

More information about the event, camping, and other facilities nearby are available on their website.

WHAT: Flamborough Fire FestivalWHY: New Year CelebrationsWHERE: The Festival Arena is situated at Mereside, Flamborou...
Read More
Filed in: 2020, Firework Champions, fireworks competition, Newby Hall
Share:
Find us on Facebook Find us on Twitter Find us on Pinterest Find us on Instagram Find us on Tumblr Find us on Vimeo Find us on Youtube Find us on LinkedIn Find us on Flickr
Previous article THE HISTORY OF SKY LANTERNS