Macys 4th of July Fireworks 2010 has been confirmed to be taking place above the Hudson River, this is the second year in a row that the Hudson River has been favoured over the East River which it seems has ceased to be the waterway of choice for the legendary fireworks display.

Last year the fireworks display was moved from the East River to the Hudson in honour of Henry Hudson and the 400 years since he first sailed up that famous river. This has, of course, affected the annual viewing pleasures of thousands on the East River, who now have to crane their necks to get a whiff of the smoke, so why move the show?

Good question, very insightful of your reader. Well, the good people at Macy's have said that the move this year was to better provide viewing for the countless thousands of spectators that annual gather to view the “best fireworks display in America” and to better accommodate the mighty barges employed to launch said pyrotechnics from.

The 2010 Macys Fireworks 4th of July display by SOUSA Fireworks will have over 40,000 shells launched from 6 barges in the Hudson River. The show, like any big show nowadays, will be synchronised to music. The musicians supplying the tuning for the night’s events will be none other The New York Pops Orchestra and the Mormon Tabernacle Choir, along with gospel, choral groups and barbershops quartets. Classy.

We will, of course, be updating this blog to let you know all you need to know about the best 4th of July Party in the U.S of A. Stay tuned!! 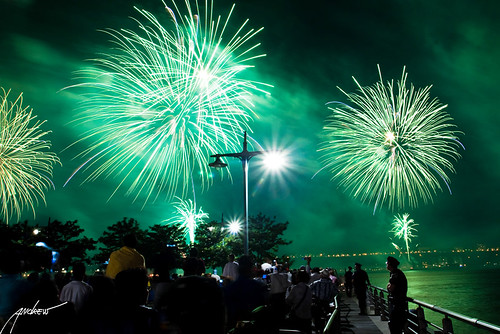