Prepare to be dazzled by spectacular fireworks along the river Thames, at Alexandra Palace Park or one of many other London fireworks displays on New Year's Eve, and for those who like to party, New Year's Eve in London offers you some of the best, clubs, pubs, dining, private celebrations and sophisticated functions in the world.

This year's fireworks display in Central London will be at the London Eye, which is celebrating its 10th anniversary. In the run-up to the midnight show, music will be played by Radio One's award-winning DJ Nihal.

The Mayor of London Boris Johnson says: "London will bring in 2010 with a bang, a glittering explosion across the midnight sky. We want to show to the world that we are looking forward to the future with the optimism and energy that characterises our capital and makes it the most exciting city on earth."

The Mayor's office advises New Year's Eve revellers to plan ahead. Many venues, such as pubs, bars and clubs, are likely to be ticketed with advance booking. Space in viewing areas along the Thames to watch the fireworks will be limited, but the display will, of course, be broadcast live on television.

Find the best views of the fireworks in London for New Year's Eve, the prime viewing spots along the Thames for watching the fireworks with Epic Fireworks. 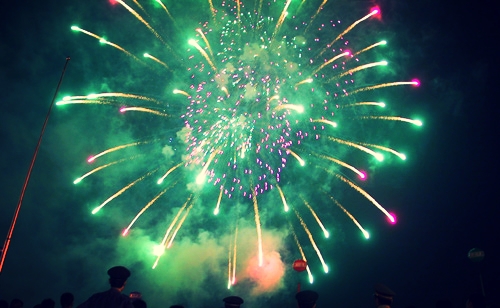 WHAT: Planet CoasterWHY: A fantastic theme park and firework simulator.WHEN: Out now.WHERE: Most gaming platforms.COS...
Read More
Filed in: Fireworks, London, london eye, Mayor of London, new year, New Years Eve
Share:
Find us on Facebook Find us on Twitter Find us on Pinterest Find us on Instagram Find us on Tumblr Find us on Vimeo Find us on Youtube Find us on LinkedIn Find us on Flickr
Previous article TONEGAWA FIREWORKS FESTIVAL 2022