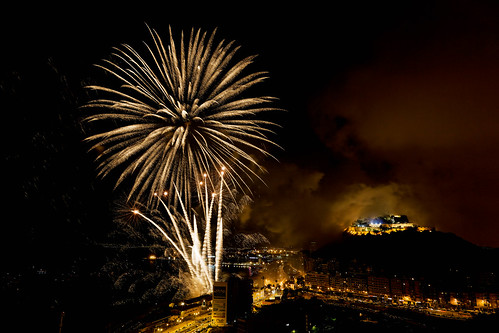 This is one of the main fiestas in the Spanish calendar and coincides with the Summer Solstice.

The event, very similar to Las Fallas (which most pyro fans will know of) brings together communities which create their own huge wood and papier-mâché structures and figures as well as seating areas called barracas which are essentially open air café’s. They are unique in the fact that they are run and funded by the locals who all ‘pay in’ to their local barracas to fund lunches, dinners and beverages for the whole family. So popular are these outdoor eateries that some families will have every meal at their barracas throughout the festival. As well as traditional food, tapas and of course wines and local lager, they also have HUGE pans of the national dish of Paella and live music throughout the fiesta.

Like with anything in Spain, these events bring together ALL of the family including grandparents and babies to take part and enjoy live music and traditional dance.

If you are fortunate enough to be visiting the area and do not already have an affiliation to a barracas (check with your hotel/accommodation as they sometime pay into them for their guests) then you will find that there are lots of larger barracas open to the general public. You will of course have to pay for food and refreshments but the entertainment is live and free and there are a number of other restaurants and hostelries about if you would prefer something a little fancier.

This year’s summer solstice is on 23rd June and the celebrations are traditionally held close to water and in conjunction with the fires of Las Hogueras as they hold onto the pagan belief that the bonfires and fireworks purify and the water will recuperate and rejuvenate which brings in one of the main rituals observed at the Fiesta de San Juan where after midnight on the 23rd, the locals jump the fires and then wash their face and feet 3 times to gain three wishes and good health for the forthcoming 12-months. Bathing on the night of San Juan is also said to help with skin complaints like eczema and psoriasis.

Bonfires burn continuously on the last night of the festivities when the ‘Muriecos’ or dolls are also burnt. The dolls originally were said to represent Judas Iscariot, the apostle who gave up Jesus for 30 pieces of silver but nowadays, the catholic/religious tones appear to have been forgotten and today’s fiesta is just about celebration and enjoyment.

The fireworks carry on for five nights at midnight and begin with a huge palm effect firework. From this point, following a strict timetable as set by the local fire service, each of the Hogueras is lit. This is one of the favourites of the children as once the fire is under control at each venue they turn the hoses on the crowds of gathered kids.

A truly spectacular fiesta, one of the main Summer celebrations so if you are over on the Costa Blanca during the week including 23rd June, you can take a quiet midnight stroll along with the tens of thousands of others to the beach and take in the spectacle and beauty of fireworks over the med.

WHAT: THUNDER OVER LOUISVILLE 2023WHY: FIREWORKS AND AIRSHOW EVENTWHEN: SATURDAY 22nd APRIL 2023WHERE: LOUISVILLE, KE...
Read More
Filed in: ALICANTE, firework display, Fireworks, Las Hogueras de San Juan, Religious Festival, San Juan, Spain, Summer Solstice, the Fires of St John
Share:
Find us on Facebook Find us on Twitter Find us on Pinterest Find us on Instagram Find us on Tumblr Find us on Vimeo Find us on Youtube Find us on LinkedIn Find us on Flickr
Previous article SOUTHEND’S FIREWORK DISPLAY IS TO MAKE A COMEBACK THIS YEAR!