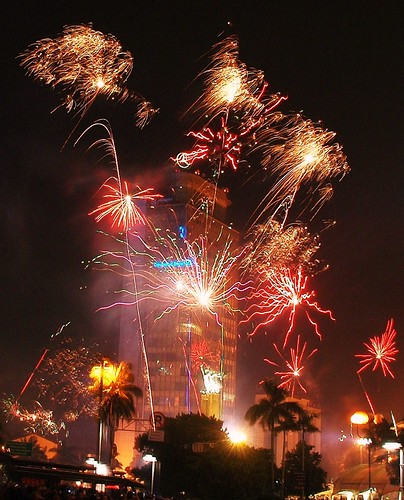 Indonesia is preparing to host its first International Fireworks Festival this June. From 15th to 17th June 2012, Comet Fireworks, the organising committee will ensure smooth running for the anticipated 150,000 spectators who will visit especially for this event.

The Festival is being held to commemorate Jakarta’s 485th Anniversary.

The venue for the display will be Taman Impian in Jaya Ancol Dreamland in North Jakarta and the organisers sincerely hope that this event will attract more international tourism to the area.

The displays will be arranged by teams of firework experts from Argentina, Australia, China, France and Morocco who will compete against each other to find the best.

The event itself will feature displays from two countries each day starting with France and Argentina on day one, Morroco and China on day two and Australia and Indonesia on the final day.

It is hoped that this new International Fireworks competition will bring much-needed tourism to the area and will it is hoped to be the first of many.

Epic will, of course, let you know the results and share some of the images and video footage from the event when it is available.

If you are thinking of having a fireworks display, give us a call. We cater to everything from the small children's garden fireworks to the full DIY display packs. We are open 7-days a week and will be only too happy to answer any questions that you may have.

Last year being the first year since 1997 the British Fireworks Championship had to be reluctantly cancelled due to t...
Read More
Filed in: fireworks festival, Jakarta Fireworks
Share:
Find us on Facebook Find us on Twitter Find us on Pinterest Find us on Instagram Find us on Tumblr Find us on Vimeo Find us on Youtube Find us on LinkedIn Find us on Flickr
Previous article Celebration Of Light Fireworks Cancelled For 2021