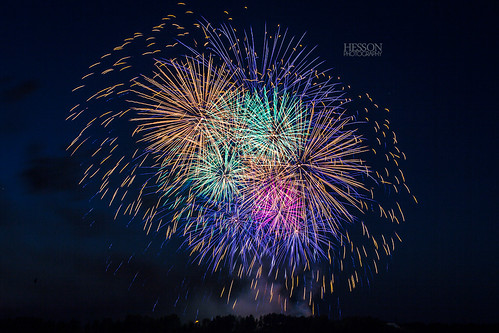 This firework spectacular has been held in the stunning Elliston Park area of Southeast Calgary since 2003, so as it enters its 10th year the organisers are anticipating some spectacular fireworks displays and rightly so.

The best of the best from all over the World will compete to hold the title of ‘Best of 2013’ which last year was taken by the USA.

The ethos of the display requirements are:

1. quality of the display
2. the scope of the work
3. colours
4. synchronicity
5. originality
6. 25% of the music must be native to the representing country
7. all displays must include the ‘Chanson Theme’ from the stage adaptations of a Clockwork Orange by Danny Lutz.

With the added facet of the displays being held over Elliston Lake which is the second largest freshwater lake in Canada the effects were stunning. This weekend sees the finale and the announcement of the winner.

This year’s competing teams are:

The festival is not just about fireworks as it is a cultural bringing together of a massive number of nationalities to enable all of the visitors the opportunity to learn a little more about themselves and one another. There are 24 cultural pavilions which aim to include visitors and let them have a special insight into lifestyles as diverse as the native American Blackfoot tribe and the mouth-watering food and brilliantly colourful costumes from India including how to correctly drape a beautiful ‘saree’. You can also enjoy a relaxing massage in the Thailand pavilion or learn the intricacies of Persian Caligraphy writing from the natives of Iran. ‘Foodies’ will thoroughly enjoy the diversity of the food concessions including the rich and vibrant food of the Caribbean or the spicy subtlety of the food from Indonesia or Vietnam.

Great Britain is represented by Pyro 2000 which is the display arm of the wonderful Black Cat/Standard Fireworks. Their theme was ‘Emotive Energy’ and included emotion packed tracks from Michael Buble, Snow Patrol, Adele, Leona Lewis and the haunting Andre Bocelli and Sarah Brightman’s ‘Time to say goodbye’. The pyro was nothing short of spectacular as we have come to expect and the lyrical correlation between the tracks and the fireworks on offer were beautiful. In our opinion, they smashed it and should come out on top but of course, we will await the finale for the results.

A hidden gem of a game is available on Steam for PC. If you are a fan of Pyro, and want to put on crazy, funny, intri...
Read More
Filed in: 2013, Calgary, Canada, Fireworks, fireworks competition, fireworks display, Globalfest, international competitions
Share:
Find us on Facebook Find us on Twitter Find us on Pinterest Find us on Instagram Find us on Tumblr Find us on Vimeo Find us on Youtube Find us on LinkedIn Find us on Flickr
Previous article INSTANTLY LIGHTING OVER 10 KILOS OF EPIC FIREWORKS