Last weekend saw three of the best professional teams from around the world battle it out at Flammende Sterne Ostfildern or Blazing Star Firework Competition.

The setting for this magical event is in the town of Ostfildern, a picturesque little town in Germany, just South of Stuttgart.

The competition started back in 2003 and continues to gain support from pyro lovers from around the world. It is a three day festival which attracts tens of thousands of visitors annually.

Competing this year were representatives from the Czech Republic, Portugal and China.

First up to fire on Friday 19th August was the team from Flash Barrandov representing the beautiful Czech Republic. Flash started out in the business originally in 1934 providing special effects to the growing European film industry and today, it remains the biggest film studio in Europe. They have supplied the SFX for blockbusters like The Bourne Identity, Mission Impossible, The Transporter and Casino Royale to name just a few.

Their music track list was entertaining and choreographed with the fireworks beautifully. The display was brilliantly done and the timing impressive. The notable pieces in this display to my mind were the strobing red chrysanthemums, the beautifully clear blue comets and some vivid purple crossettes which were gorgeous. The real crowd pleaser were the rainbow peonies and the beautiful willow bursts. Great effort team Flash Barrandov.

Next to display; Macedos Pirotecnia on Saturday 20th August were representing Portugal.

The opening sequence was gorgeous and the strobing shells were on another level entirely. Pinks, golds, greens; absolutely tremendous.

Sadly, as the display grew so did the amount of smoke. It did get to a point where the display was engulfed in a huge smoke cloud making it impossible to see the higher effects as they were completely obscured.

A great mix of tracks from the great rock and roll years and of course, no show would be complete without a smattering of ‘Queen!’

Shame about the smoke as it definitely impacted on everyone’s enjoyment but we will have to see what the results say.

Finally to fire; Hefung Fireworks on Sunday 21st August who were representing China.

Hefung Fireworks is one of the biggest manufacturers of fireworks in China.

Their display was nothing short of beautiful – absolutely incredible with some really pretty combinations and shell effects rarely seen in the UK. Really crisp, clean and clear effects and massive shells – notable a blue peony with a silver pistil centre, colour changing peonies. The timing and precision on the groundwork was in another league completely.

The winners were announced and we are delighted to confirm that Cindy and Davo representing Hefung Fireworks won first place. VERY WELL DONE. 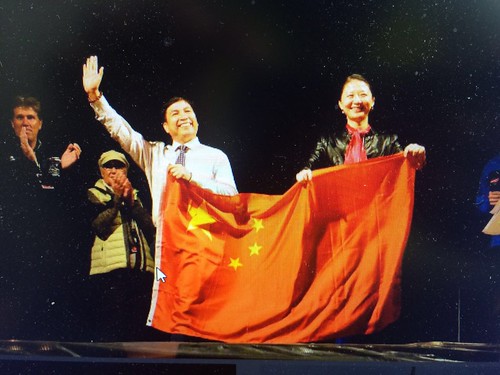