Locals and tourists will celebrate the Michigan Challenge Balloonfest's 25th anniversary with a bang this summer.

The event, scheduled for June 26-28, will feature a fireworks show along with its regular hot-air balloon launching activities.

"We wanted to do something extra special this year, something to really shine the light on this event," said Pat Convery, president of the Howell Area Chamber of Commerce, which hosts the festival.

The fireworks show is planned for the Friday night of the festival, held at the Howell High School complex. The Howell Public Schools board OK'd the new feature Monday during its regular meeting.

Howell Area Fire Chief Andy Pless told the board he felt comfortable with the fireworks show and the security that will be provided through fencing as well as firefighters, police officers, and members of the National Guard.

"They launch these fireworks right next to the Capitol," Pless said. "If the governor's OK with it, we are."

Working with the chamber will be Night Magic Displays, the company that heads the firework shows at Lansing's Oldsmobile Park. The company will provide a $5 million insurance policy for the event.

The fireworks will be launched from the baseball field behind Highlander Way Middle School. If successful, Convery said, the chamber will consider making it a new tradition for the festival.

The event draws thousands of tourists and millions of dollars to the area each year, according to the Livingston County Convention and Visitors Bureau. 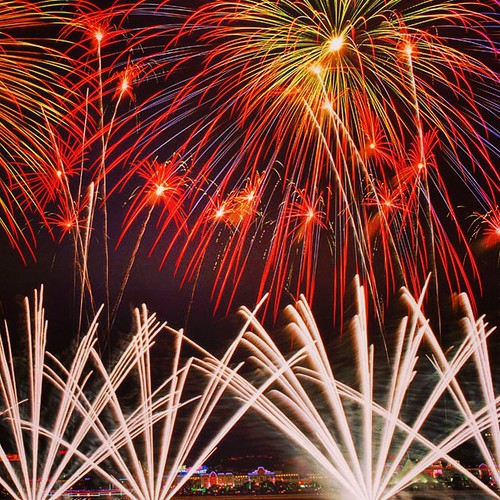 Every year around the world, people gather to watch the clock tick over from 11:59pm on December 31st, to 12:00am on ...
Read More
Filed in: Balloonfest, Fireworks, hot-air balloon, pyro
Share:
Find us on Facebook Find us on Twitter Find us on Pinterest Find us on Instagram Find us on Tumblr Find us on Vimeo Find us on Youtube Find us on LinkedIn Find us on Flickr
Previous article INSTANTLY LIGHTING OVER 10 KILOS OF EPIC FIREWORKS