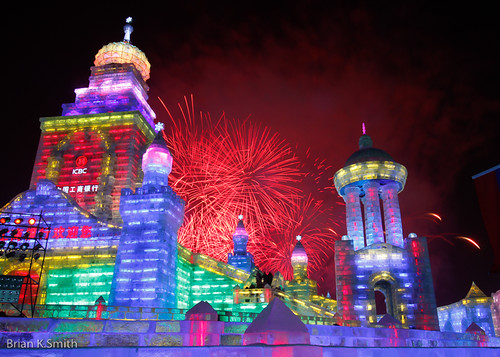 Fireworks fill the night sky at the opening of the 28th Annual Harbin International Ice Festival. The display of fireworks heralds the start of a month of Ice Sculptures which are simply breathtaking.

The event, which officially opened on 5th January 2012, was actually opened mid-December at the beginning of the Winter Holidays for the region. This is, of course, weather dependent due to the nature of the beast. The weather in the region is variable between a summer high of 21.2c degrees but over the Winter, thanks to its Siberian borders, the wind chill creates a variance of an average temperature at this time of the Year of between -16.8 to -38.1 degrees centigrade.

In the Heilong Jiang Province in China, about a 3-hour drive from Beijing has held this festival since 1963. However, the event stopped for a time during the Cultural Revolution and was re-introduced in 1985. Originally held in Zhaolin Park in the old district of the City, it was moved to the current spot on Sun Island in the Songhua River in 2001 due to space requirements as the event grew and grew.

It is one of four major Ice Festivals from around the World. Yearly they are held in Harbin – China, Sapporro – Japan, Quebec City – Canada and Geilo – Norway. All running from Mid December to late February in some part.

The display in Harbin is the biggest and longest featured display in the World. Thousands of tons of Ice are cut from the Songhua River using swing saws and then the artists get to work with picks, chisels, and saws creating some of the most astonishing buildings and artworks you will ever experience. The displays are lit by coloured laser and Ice Lanterns.

The quality and clarity of the ice are not as I thought dependant on the purity of the ice. The cloudy ice is a result of air attaching itself to impurities in the water creating minuscule air bubbles.

WHAT: Las Fallas De Valencia 2023WHY: Celebration of St Joseph and his efforts to protect the Royal FamilyWHEN: March...
Read More
Filed in: Annual Harbin International Ice Festival, Fireworks
Share:
Find us on Facebook Find us on Twitter Find us on Pinterest Find us on Instagram Find us on Tumblr Find us on Vimeo Find us on Youtube Find us on LinkedIn Find us on Flickr
Previous article TONEGAWA FIREWORKS FESTIVAL 2022