In the mid 16th century, Venice was besieged by yet another outbreak of the plague. The Bubonic Plague or Black Death took the lives of more than 50,000 Venetians between 1575 – 1576, which when you consider that the total population at the time was only 160,000, meant that 1 in 3 died of this dreadful disease which even to this day is classified as a bio-terrorist threat.

In 1576, the most serene Republic of Venice’s Senate agreed to erect a church to Christ as a plea for help. The Church of the Most Holy Redeemer (Il Redentore) was erected. 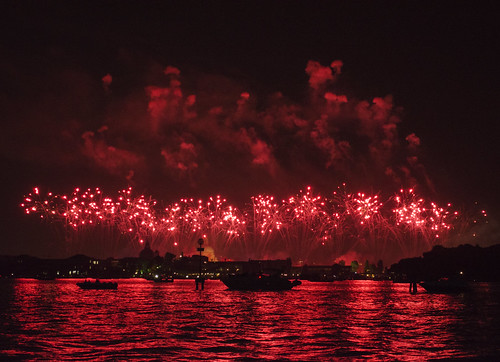 By July 1577, the area was officially declared plague free and it was decided that in celebration of the deliverance from certain death, each year, there was to be a Fiesta and of course a church service. The Redentore is an authentic, age-old, Venetian event which is very close to the hearts of the people of Venice. On the Saturday, the evening before the service of thanks, at around 7pm, the 333 metre Ponte Votivo is opened up and the people go to the church for the Eucharist at around 7.30 and the blessing of the event and the people. 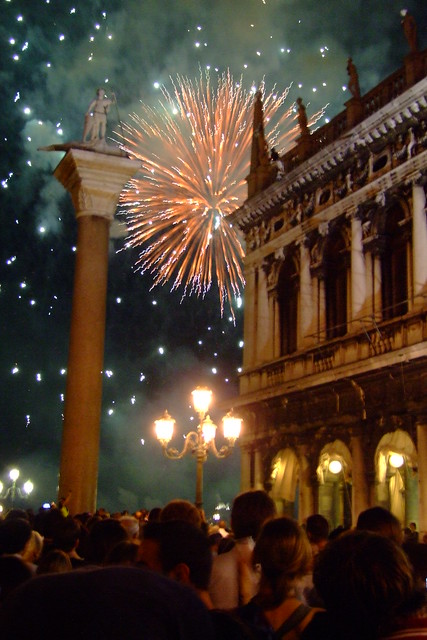 There are boats and barges packed with people, which moor alongside each other to share the music, fun and laughter with large groups of family and friends. The vessels in the harbour are all richly decorated with pretty garlands, flowers and lights.

The beautiful pyrotechnics begin at around 10.00pm on St Marks Basin under the control of the fantastic Parente Fireworks. The fireworks are set up on 35 floating pontoons over a distance of around 600 metres in an unusual cross shape. The display lasts between 45 minutes – 1 hour as a general rule and afterwards, the younger contingent of the 100,000 people strong crowd of spectators go off to the Venice Lido where they await dawn and the sunrise.

It is another age old tradition, which like a number of other festivals has been around for many hundreds of years and will continue to amaze young and old alike for generations to come.

As Christmas fast approaches, thoughts are of course heading to New Year’s Eve and of course, we want to ensure that ...
Read More
Filed in: 2016, FESTA DEL REDENTORE, firework display, Firework Fiesta, italy, venice
Share:
Find us on Facebook Find us on Twitter Find us on Pinterest Find us on Instagram Find us on Tumblr Find us on Vimeo Find us on Youtube Find us on LinkedIn Find us on Flickr
Previous article BUYING FIREWORKS AS A GIFT