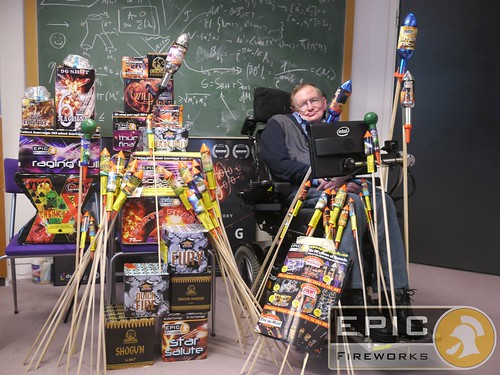 We have, as you might appreciate, tens of thousands of customers, many of whom we know on a personal level but when it comes to famous, we have our favourite.

Professor Stephen Hawking has for a number of years ordered fireworks from us for his own birthday celebration and his annual Bonfire Night affair. This year was no exception but with a difference, he very kindly forwarded photographs of his ‘epic fireworks stash’ to us.

For those of you who have been living under a rock for the last 20 years or so, Professor Hawking is regarded as one of the worlds greatest, most brilliant theoretical physicists since Einstein.

Have any of you seen his new film, called Hawking which is now out - the film ends with an epic fireworks scene :)

Professor Hawking remains a fascinating man who we sincerely hope, health permitting, we get the opportunity to meet face to face one day. In the meantime, we hope he thoroughly enjoys his firework show.

If you are looking for award-winning consumer fireworks for a show to entertain family and friends, why not give us a call. If you have someone who enjoys fireworks who is prepared to fire them for you, they are really excellent value for money and will wow everyone.

Update – 1st June 2020 – The fireworks will happen tonight at 8pm Japan time or 12pm in the UK today. The organisers ...
Read More