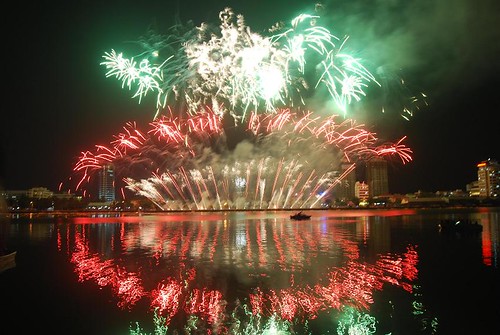 2012 sees the fifth International Fireworks Competition getting underway between 29th and 30th April.

The event is to find the Champion of Champions as all four competing teams are previous winners of the Fireworks Competition. China, France, Canada and Italy will all be competing along with the hosts Team Vietnam.

These years theme the colours of Da Nang. The competing teams will once again thrill the crowds with colourful fireworks depicting DaNang young, a dynamic and rapidly developing city along the Han River.

We have added quite a few new products to our range recently, keep reading to see the details on these. Afterglow Fou...
Read More
Filed in: 2012, DaNang, fireworks competition
Share:
Find us on Facebook Find us on Twitter Find us on Pinterest Find us on Instagram Find us on Tumblr Find us on Vimeo Find us on Youtube Find us on LinkedIn Find us on Flickr
Previous article SOUTHEND’S FIREWORK DISPLAY IS TO MAKE A COMEBACK THIS YEAR!