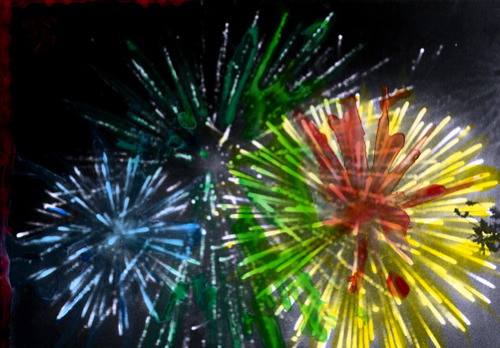 Fireworks have been used to light up the night for centuries for aesthetic and entertainment purposes. However, in the recent times, colour has been introduced into displays.

Today, pyro enthusiasts tend to choose the colour that suits the purpose of the display. For example, the red, blue and silver/white colours were most popular colours during the Queen’s Diamond Jubilee. Of course, these are primary colours for the United Kingdom and its national flag.

In the beginning of fireworks, yellows and oranges were the only colours that could be produced using steel and charcoal. Later in their development, chlorate's were added which produced red and green colours. From this moment, there were greater quests to make fireworks that not only give loud bangs but colours.

Incandescence is simply the light produced from heat. The heat makes the substance to grow hot and glow. This result in the emission of infrared, then red, orange, yellow and `white ‘light.

The production of these colours relates to the level of the temperature. Deep green and blue colours require much higher temperature - ones which are not practicable for fireworks and cannot be formed using this method. Instead, they are produced through the mechanism of luminescence.

Luminescence is light produced by an energy source. This is a more complex method but suffice to say that the breakthrough in this process has helped the pyrotechnics in the production of blue colours.

The 64 shots Cobolt blue from Epic fireworks is a good example. When it bursts, it produces loud sapphire stars of blue colours only. It is this colour that makes it a bit more expensive than others in the same category.

We are led to believe that they are working towards producing a piece that will emit deep forest green colours. This, when achieved, will be an advancement not only in the fireworks industry but also in the fields of entertainment.

The field of Fireworks has come of age and the spectators have developed an unquenchable taste for a colourful display.