Back in April we brought you details of Le Festival D’Art Pyrotechnique Cannes which was first competed for in 1967, the stunning bay between Iles de Levine and La Pointe de l’Esterel the best of the best international professional pyrotechnic teams battle it out for the Silver Vestale, the Audience Award and the Jury Prize.

The event pulls in crowds of around 200,000 spectators on the Cote d’Azur and this year was no exception.

The competition will be judged on:

Music and firework conception: originality and quality of the pyrotechnics
The soundtrack- quality and originality
The synchronisation – the precision timing between the bursts/breaks/effects and the cadence of the music track
General artistic impression – each juror will note their personal impressions and compare notes at the end

First to show their mettle – Baku Fireworks Group (Azerbaijan) who fired on 14th July. I have to say from the outset that it was a massive firing site and there did seem to be some disparity between the music (which incidentally was very emotive) and the pyro was lovely with some beautiful glitter shells. The slices were absolutely spot on and the green groundworks were lovely with brilliant gold crossette breaks. A nicely paced show and again the music was very evocative of the Azerbaijan culture. With the increase in pace, the titanium flashes were perfect and some really pretty shaped rings. 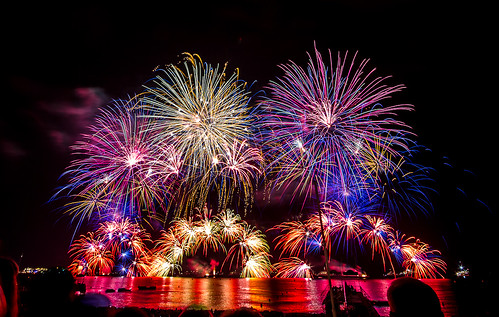 Something was definitely amiss with random pieces firing out of sequence affecting the overall symmetry and the right hand side appeared to have a mind of its own. Despite this the effects were beautiful and the variety and clarity of colours throughout were exceptional.

Next up; Surex (Poland) who took centre stage on 21st July starting out with some impressive fanned glittering groundwork which were just delightful but they also appeared to be having some technical issues as the timing was definitely ‘off’.

They had some enchanting glittering rings with a purple and gold pistil centre and the falling golden horsetails gently falling in the sky but again, another rogue shell burst to the right out of sequence.

There were some nice ground fans, aquatic shells and sweeping fans alongside some lovely spider breaks in bronze before some MASSIVE chrysanthemum bursts.

The finale section was really clever with some split second timing to the music and the lovely glittering tipped willows were sublime. Hanwarimono, massive chrysanthemums and crossing slices – VERY DRAMATIC – a great display.

Intermede of France were next to entertain the troops so to speak on 30th July and from the first note of the music, their musical interpretation was absolute on on the money and unusually the sound of the pyro could actually be heard above the soundtrack. The super slow falling horsetails were beautiful but it was a bit disjointed and lacked substance (a few more pieces would have helped) although you were left feeling as though building towards something spectacular.

Massive glittering and tailed chrysanthemum shells and the single shot slices on the operatic section were almost ethereal.

Once again, a few random pieces fired incorrectly, one big shell which I am sure frightened the living daylights out of the technicians but the finale was really very colourful and dramatic and the firing system issues continued to plague them to the end – a terrible shame.

Great opening with some incredibly bright red/purple glittering slices and a bit of a misfire on the right (definitely the bogey side!) but the fireworks dancing to the beat of the music were lush! The strains of Paladio by eScala with beat perfect pyro (especially the fanned gold to purple strobing glitter ground pieces – stunning!) and the greens set up the purples and silvers beautifully.

Musical choice was well received by the attendees and the ‘Delilah’ section with the superbright stars were lovely with some breathtaking colour combinations and superb musical interpretation. Onto ‘My Heart Will Go On’ and the beautiful music with the magical and unique and pretty effects and musical interpretation was once again on the money and the massive paklm bursts were luscious.

Adele’s ‘Set Fire To The Rain’ is a great track and fitted the bill perfectly the circle shaped and space ship shells were absolutely lovely but the pyro bogeyman was at the ready with another misfire or two and the Big Spender section was very precise with some beautifully intricate combinations.

Strobing shells, bronzes, greens and lilacs and the flaming right side was on a mission again (I am telling you straight – I would have been going flip mode by this point!).

The penultimate track was back to the Divas with Whitney and I will always love you with big heart bursts, super shells and falling glitter and the hearts which actually broke correctly – Go Pyrotex

The finale was a treat for the eyes as the cadence of the fireworks rose and fell to the beat of Nessum Dorma – well done to the team.

The opening bursts of a line of ground horsetails with beautiful glowing pearls was quite stunning as they majestically fell to the water followed by several almost perfect Chrysanthemum shells changing to strobing glitter which were exquisite. However, the Argentinian team were not about to have it easy either as once again the right hand side threw up 3 horsetail shots out of sequence (which was really apparent with the two super willow shells on the centre and left!). The second sequence had the fireworks split second perfectly timed to the musical track and it was absolutely charming but then there was absolutely no ‘form’ to the aerial work at all and some frighteningly low breaks again.

A nice selection of effects, but the standout section for me has to have been the fast firing full spread fans which were awesome. 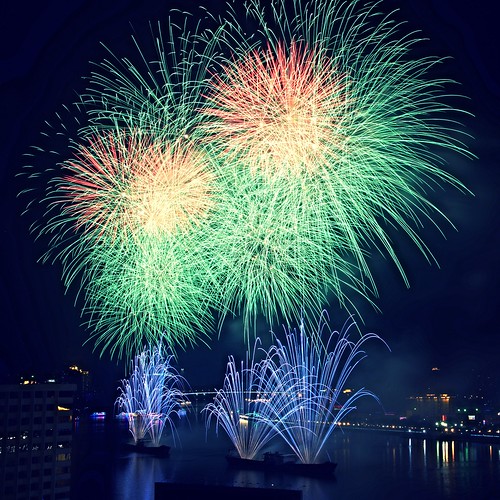 I have to say that even as someone with a very eclectic musical taste the tracks chosen by the team were at best random and at worst, sounded like a tortured cat. This is my biggest bugbear with millions of tracks available why the music is so pants!

The hearts to flying fish were very nice and the pretty red strobing comets falling gracefully just before the finale were lovely and subtle. The finale itself was very dramatic with some massive willow but it doesn't take away from the technical/set up errors which plagued them throughout.

The last night was given to a showcase display from Prestatech Artifices who put together an opening sequence of massive brocade shells which were nothing short of stunning. The Japanese determine that the more perfectly spherical a shell burst is, the better the firework gods will appreciate it. Along with the other competitors, Prestatech were plagued by technical issues too which I am sure the majority of spectators wouldn’t have been any the wiser about.

Well done to all the competitors.

WHAT: Las Fallas De Valencia 2023WHY: Celebration of St Joseph and his efforts to protect the Royal FamilyWHEN: March...
Read More
Filed in: Cannes, firework competition, Firework Displays, International Festival of Pyrotechnic Art
Share:
Find us on Facebook Find us on Twitter Find us on Pinterest Find us on Instagram Find us on Tumblr Find us on Vimeo Find us on Youtube Find us on LinkedIn Find us on Flickr
Previous article TONEGAWA FIREWORKS FESTIVAL 2022

Your description of Cannes Pyro competition was masterful.
My family and I have watched some these displays over the last 21 years and look on them as our holiday highlights . ( no pun intended)
Due to an uncertain future in travels to the South of France, do you have the 2022 program to hand? It would be most useful for advanced planning
Many thanks.
All future success to Epic.
We have been buying from you for several years now for family events and the quality of your smaller units ,such as Majestic and Thunderous Finale etc with great fun and appreciation from one and all……one of our notable guests rated our display as superior to one put on by one of Boris’s benefactors at Cap Ferat.!!!