2018 marks the 34 th annual event celebrations for the west coast city of Perth. The event which has now been running for a number of years is a superb family orientated event with everything to entertain the family, young and old alike.

The event incorporates cultural events, music, dance and art with beautiful food and fireworks – what more could you want.

Attended by in the region of 300,000 people from across the City and outskirts, as well as those who are visiting the area are in for a treat. Set along the huge Swan River (aboriginal name is Derbarl Yerrigan) which runs through the City of Perth and is home to a huge array of wildlife including bottle nose dolphin, shark and rays and the birdlife is rich with a massive range of parrots and cockatoo to name but a few.

Australian’s in today’s rich and varied social structure celebrate this wide diversity of their society together in this hugely varied landscape and give thanks for their beloved country.

Australia Day was first celebrated on the formation of New South Wales which took place in 1815 and it did not become an official holiday until 1994. Like our new year’s Queen’s Honours list,
Australia have an Australia Day honours list which recognizes the efforts, achievements and service of ordinary people as well as celebrities for their contribution to the socioeconomic advances in their own fields. 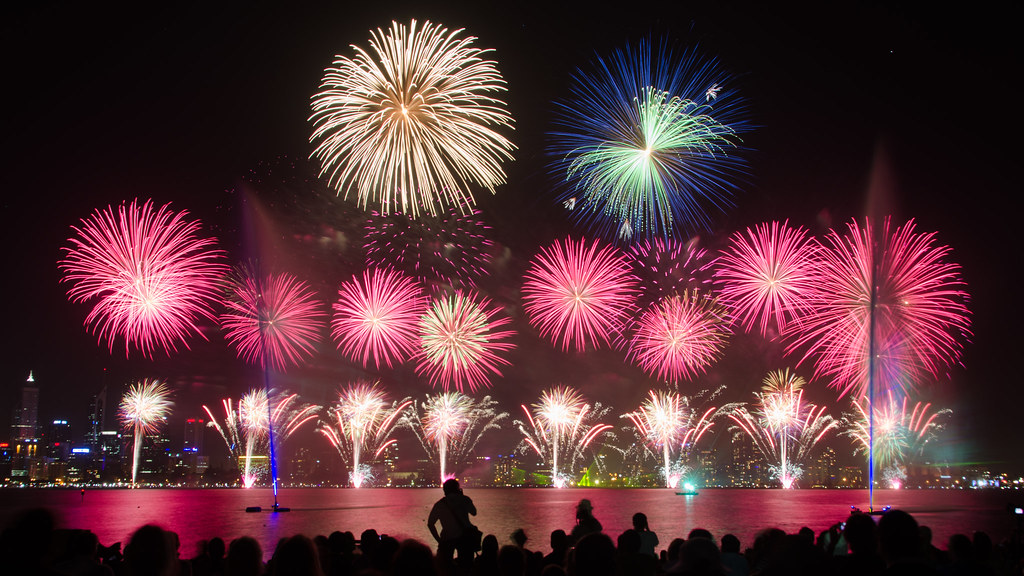 Whilst widely known today as Australia Day, it has been dubbed Anniversary Day, Foundation Day and ANA Day over the years.

Although you are able to bring your own picnic, it is illegal to consume alcohol in public in Australia. However, you are allowed to drink (within reason) in the designated ‘Picnic Zones which are positioned in Langley Park Reserve, Kings Park and the Botanic Gardens but you are limited to a 6 pack of beer/pre-mixed cocktails or 1 bottle of wine.

The fireworks take place nightly from 8.00 – 8.30pm and are supplied and fired by primo display company KC’s Fireworks Displays. The team do not appear to be on the competition circuit so little is known about their prowess but as the company has been supplying beautiful pyrotechnic displays for 30-years, they may know a thing or two about fireworks.

If you are in Perth, visiting family and friends or indeed holidaying, take advantage of the free event which receives Lotterywest funding (like our National Lottery charitable donations) in support of the local communities across Western Australia.