You have 0 items in your basket

The 64 large bore shots fired in volleys by Thunderous Finale are simply awesome - the effects are huge and the noise pitch ranges from screeching highs to bellowing booms with crackling in between. Each volley fires a bank of four screeching golden tails leading to extremely loud bangs and large bursts above and the pace is relentless.

Effects include large bursts of electrifying clouds of crackling, clusters of golden dragon’s eggs and humming coloured palms with strobes that overlap giving the effect of a multi-shell burst time and time again. The final volley boasts a monstrous eight shots each which tops a magnificent display of extremely impactful sound and vision.

Thunderous Finale, the flagship single ignition finale barrage from Epic Fireworks, is regarded as one of the best consumer fireworks available in the UK - Thunderous Finale is true to its name with volley after volley of sheer power and is absolutely essential for any finale.

Featured In The Metro newspaper 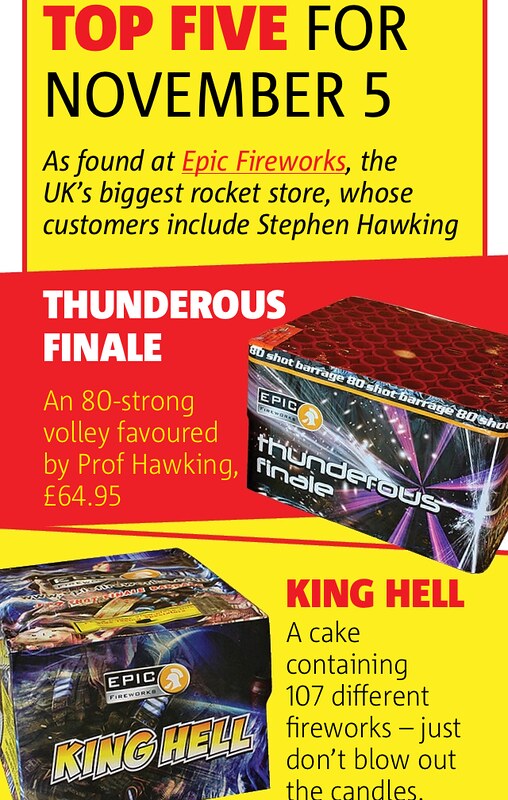 Let off two of these along with two screaming spiders! What a finale, crowd said it was as good as a professional fire work

dont do one- if you can do two or more!- these are the Epic pace setters! total quality and an audience thriller to end a display with- totally repeated customer to these guys like!

Myself and a friend fired two of these together saturday night and what a finale! Filled the sky and kept it busy with lots of bangs/screeches/whistles/crackles and colours and my audience loved it and were cheering for more afterwards. This is a fine way to bring a display to an end 5/5 A most excellent thunderous finale if ever there was, let's have more of it!

An instant classic from the moment it was first created, Thunderous Finale absolutely fills the sky above you...and everyone else for that matter. An 80 shot large calibre monster of a barrage that fires in volleys of four for maximum effect; until the final two volleys are fired 8 tubes at a time.
A fantastic long lasting barrage that should be in every display.

This was my finale set of 5 at the same time THIS WAS THE BEST OF THE BEST.

Easy to see why this is a best seller- though when actually firing these and under all the stuff that comes down you really appreciate what a classy piece of kit this is!- use one as a supliment to your finale as i do and it fits in well with allmost anything- a definate 10/10!

This Firework for me is the best SIB i have ever seen. This barrage deserves an award in my opinion. A massive firework with massive bursts which will leave your audience breathless. If you buy this Firework you will not be dissapointed and you will definately come back for more, I know i will. Superb Epic.

Write Your Own Review