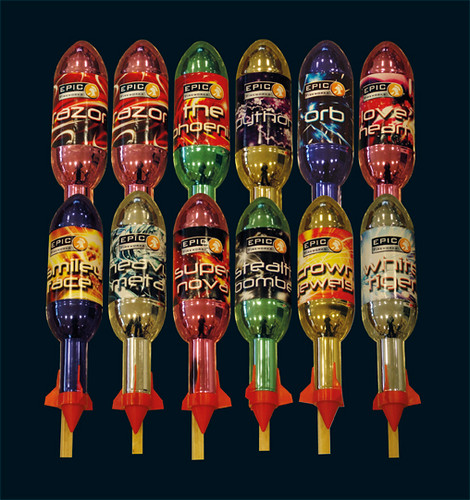 FACT: Epic Fireworks stock the largest range of BIG ROCKETS in the UK.

If you are looking for a box of arguably THE most spectacular rockets available to consumers in the UK then this is the box for you. Containing 12 of the biggest, boldest, brilliant bad boys: THE DIRTY DOZEN

2 x Razor Rockets - The Razor is a stunning rocket. With a large burst of red stars that move into a ring formation with crackling golden stars at the centre, the red stars then split into crossettes creating a secondary ring effect.

1 x Phoenix Rocket - The Phoenix Rocket rises from the flames to give a massive golden chrysanthemum tipped with flying red stars and a centre of gold crackles. This is an incredible display rocket and sure to be a favourite.

1 x Python Rocket - The Python Rocket is massive! Huge stars erupt from the core in brilliant red and green lights snaking their way across the sky. Must be seen to appreciate the size of this effect!

1 x Orb Rocket – The Mighty Orb Rocket breaks to a huge gold chrysanthemum that turns and starts to fall with glowing white tips that fade into silver strobing stars.

1 x Love Heart Rocket - does exactly what it says on the tin. A beautiful big love heart in the sky to delight all young lovers out there.

1 x Smiley Face Rocket - As the name suggests, this rocket is sure to bring a smile to the face of anyone who sees it. A purple ring of twin stars surrounds two large green eyes and red starred smile.

1 x Heavy Metal Rocket – This is hardcore fireworks at their best. This massive rocket reaches the skies and bursts into a giant red coconut ring with a golden pistil (central palm effect) Huge red stars form the ring and a 4 starred golden centre is sure to get the heads banging at your party.

1 x Super Nova Rocket - The Super Nova Rocket is like the birth of a star, fast, colourful and HUGE. This galactic rocket has a huge cloud of silver that turns into red and green accompanied by a crackling cloud of glitter. Simply amazing!

1 x Stealth Bomber Rocket - This stunning double ring effect sees a huge red ring surrounded by an even bigger green ring and a crackling star effect at the centre.

1 x Crown Jewels Rocket - This erupts into a massive silver brocade crown burst with glittering white stars. If you are looking for an imperial ending to your display, this will do it beautifully.

Whatever your feelings are about rockets, these are truly the most spectacular available to the consumer market and will be a great addition to any show. They are all sold individually in our Head Office showroom so if you want to check them out, you can see them on our website, YouTube or indeed on screen here at Head Office.

We are open 7-days a week from around 8:00am to 5:00pm at the moment and the opening times will increase the nearer we get to Bonfire Night. However, if you are not able to make it over to see us at these opening times, we are happy to make the necessary arrangements to accommodate you.

A hidden gem of a game is available on Steam for PC. If you are a fan of Pyro, and want to put on crazy, funny, intri...
Read More
Filed in: big rockets, Bonfire Night, Epic Fireworks, guy fawkes night, rocket
Share:
Find us on Facebook Find us on Twitter Find us on Pinterest Find us on Instagram Find us on Tumblr Find us on Vimeo Find us on Youtube Find us on LinkedIn Find us on Flickr
Previous article TOP 5 HALLOWEEN FIREWORKS