Every year, across Japan there are literally hundreds of Firework Festivals. Japan has a 400-year history of firework production and they mainly create firework shells of differing sizes. Annually, the small town of Katakai plays host to thousands of firework enthusiasts of all ages to watch first hand the Hanabi Takai Festival. This event usually lasts around 2-3 hours during which time hundreds of shells are fired from mortar tubes which are everything from 6 inches in diameter to the HUGE 4-foot ones used for the spectacular Yonshakudama.

This big bad boy is an incredible 420 kilograms (925 lb) in weight and is loaded into the mortar tube (which to be fair is the diameter of a tunnel) by crane to avoid impact damage and of course because it weighs so much.

Thousands descend on Katakai by coach and train to see first-hand the giant fireworks which are held in the highest regard by the Japanese who believe that the launch will lift the spirits and that the precision of the bloom, shows the skills of the firework artist.

In Japan, like the rest of the World are specially trained to handle the explosives and create some incredible bloom effects. Traditional shell production is taught ‘hands-on’, as skills are passed through the generations pertaining to the sheer intricacy of their creation. The mega Yonshakudama takes up to a year to make as they are ridiculously time-consuming to create.

Here is the inside of a firework shell where you can see all the composite stars, how they are laid out within the shell to ensure that they explode in a certain way. 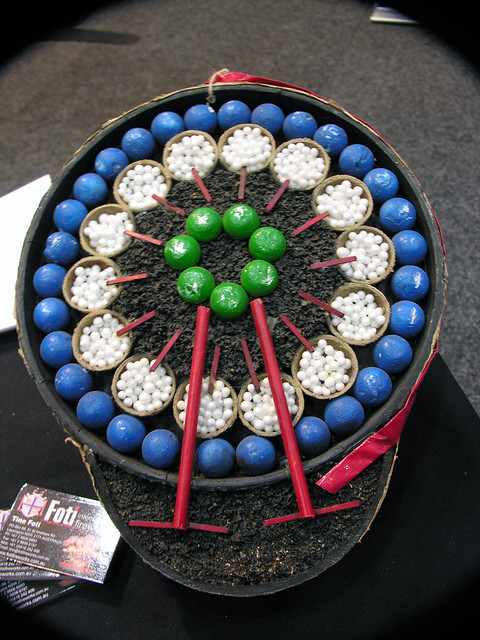 The mega shell is 64 times more powerful than the usual 4/6 inch ones we see over here in the UK. All pyro-makers in Japan consider themselves artists.

The programme for the event is every bit as big as the event and usually is the size of a broadsheet newspaper, packed with details of the shells, their production, sponsors and messages of love and support.

During the event, which is quite lengthy, the locals will pop along to The Shrine to enjoy food from the huge array of concession stands about and treat themselves to a selection of sweet or savory dishes available.

OKOBO MIYAKI – Japanese savoury pancakes filled with shredded cabbage, shrimp, garlic, chilli and noodles topped with a couple of slices of bacon and a fried egg.

IMAGAWAYAKI – A thick pancake with either a sweet or savoury filling.

The history of fireworks in Japan clearly goes back an awfully long way, indeed the images below were in a book produced in the early 1900s which was part of a catalogue of shells which were available.

Here is the supberb video of the Yonshakudama:

So the Beijing Winter Olympic games have finally ended - which is very very good news for the firework factories in C...
Read More
Filed in: Biggest Firework Shell, Fireworks, fireworks shell, japan, YONSHAKUDAMA
Share:
Find us on Facebook Find us on Twitter Find us on Pinterest Find us on Instagram Find us on Tumblr Find us on Vimeo Find us on Youtube Find us on LinkedIn Find us on Flickr
Previous article BUYING FIREWORKS AS A GIFT