The port was first opened in June 1859, giving Yokohama foreign shipping rights to countries such as America, Holland, Russia, Britain, and France. At this time, there was no official celebration for the opening, but as the year passed and the port rapidly grew it was decided that on the one-year anniversary that a celebration would take place. Following exponential growth, in 1995 it was established as an annual event which became the official Yokohama Port Festival. The second of June is classed as an official holiday in Yokohama and the celebration attracts over 700,000 visitors over the 2 days; making it the biggest event celebrated at the beginning of the summer in Yokohama.

Everywhere you go throughout summer in Japan you will see festivals of all kinds, and with these, it normally means one thing follows: fireworks. This event is no exception to the rule. 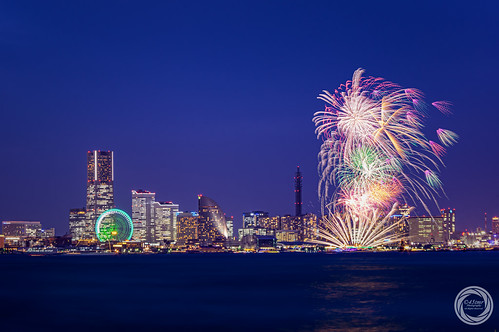 Yokohama is brimming with tourists’ spots and a stone throw from Tokyo. This was the first established festival to open its doors to foreign visitors over a century ago and the region has benefited massively for this with architecture, new traditions and customs and international music and beer festivals were brought to the people of Japan via this port.

The 2-day event is packed with action and activities to be enjoyed by both the young and old, both off and on the water. Here is a rough guide of what to expect throughout the 2 days:

The opening of the festival is a concert with local talent performing onstage, along with the performance from professional dancers and children producing dynamic scenes on stage.

The main performance of the festival is “dream of harmony”, 800 people from across Yokohama join and form a choir and treat the visitors to a musical ensemble. In the entertainment experience part of the festival, you can ride a small ship one of the many amphibious boats or buses or give the sea kayaking or stand up paddle boarding a try. If you don’t have your sea legs, there is plenty on dry land to enjoy whilst you watch those brave (or crazy) enough to take part.

The beam spectacle fireworks are the name given to the magnificent fireworks display held on the evening on the 2nd of June. This takes place over the harbour lighting up the skies above. In the 40-minute show, you will be amazed by the musical fireworks, lasers, and lights making this a fantastic end to the evening’s celebrations.

If you fancy a different view on the show, there are also plenty of boats offering evening cruises some with dinner packages to make your day that extra special.

The summer in Japan is packed with firework events so if you can’t get along to see this first-hand but are visiting Japan through the Summer, we feature articles on most of the events taking place so keep an eye on our blogs for more information.