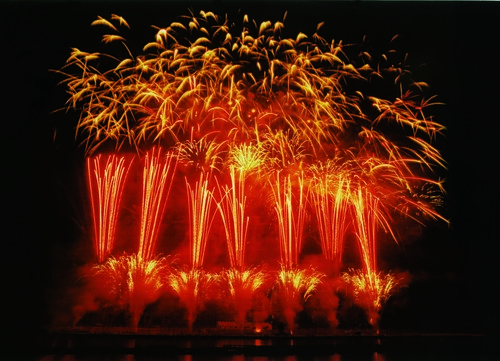 The Asian giant has imposed a huge security clampdown in the capital ahead of October 1 celebrations, which will include a military parade, song and dance performances, and the huge fireworks show around Tiananmen Square.

The National Day fireworks display will include more than 20,000 fireworks shells - double the number used to light up the sky for the Olympic opening ceremony last year, the official Global Times newspaper reported.

Quoting Ding Zhenkuan, director of the fireworks performance, the newspaper said there would be 99 launch bases for the rockets, including Tiananmen Square and Chang'an Avenue - the route for the parade.

Scheduled to be the 22nd running of the FIFA World Cup competition and for the first time in the events history, taki...
Read More
Filed in: beijing, china, Fireworks, fireworks display, Tiananmen Square
Share:
Find us on Facebook Find us on Twitter Find us on Pinterest Find us on Instagram Find us on Tumblr Find us on Vimeo Find us on Youtube Find us on LinkedIn Find us on Flickr
Previous article INSTANTLY LIGHTING OVER 10 KILOS OF EPIC FIREWORKS