Using Fountains To The Best Effect 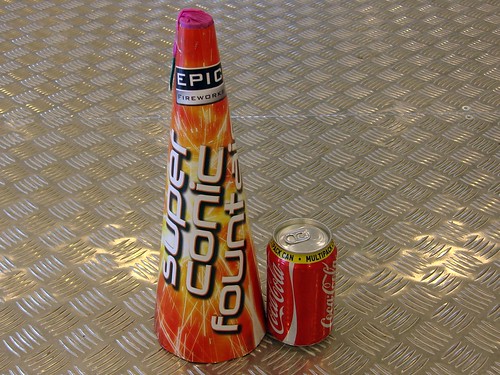 Fountains are a popular, but under-estimated firework. They lack the “Big Boy” appearance of a large rocket, and don’t draw the eye on the shelf like big cakes - but none the less they are a cheap and excellent way of adding to your display.

I’d recommend that fountains are used early in the display - perhaps get people’s attention with a large rocket to start, then start the show properly with some fountains. Children love them, and they are a pretty and pleasant way to ease people into the show.

The Krazy Klock fountain, a long time favourite from Brothers Pyrotechnics, has a remarkable mix of effects and duration for its small size and looks cool- start with that! Build on this with some multi-effect fountains, followed by Conic Fountains (see the video of the Super Conic Fountain below) - ideally, these should start just as the mixed effects are finishing. They build in pace from a small whoosh, to a very bright and high plume, a guaranteed crowd pleaser. I like to use a Silver at each side with a gold in the middle. Finally, for a bit of aggression, finish the fountains section with a pair of crackle crackers or “snakes”. These innovative fireworks are based on the crackers of old but use a crackle rather than bang effect.

And, so, that’s that! For a budget of around £40 (the cost of just one medium-sized cake,) this gives several minutes of entertainment, will be popular and appeal to all ages, and adds a mix to the show that people will remember.

Bastille Day is France’s most important national holiday and commemorates the storming of the Bastille which took pla...
Read More
Filed in: Fireworks, Fountain
Share:
Find us on Facebook Find us on Twitter Find us on Pinterest Find us on Instagram Find us on Tumblr Find us on Vimeo Find us on Youtube Find us on LinkedIn Find us on Flickr
Previous article TONEGAWA FIREWORKS FESTIVAL 2022