We meet at breakfast for 0900 and had the usual to eat and arranged to meet downstairs at 1030. It was another cold and wet start to the day and we made our way to the rocket factory from episode 6 to see a rocket demo at night.

Tomorrow we would set off to Beihai in the Guangxi province and wanted to get back to the hotel early to catch the flight in the morning. We started the rocket demo at 0600, you can see some of the rockets in the video below.

After the demo we went for a foot massage and then back to the hotel to get an early night........unfortunately we bumped into the Celtic fireworks again. 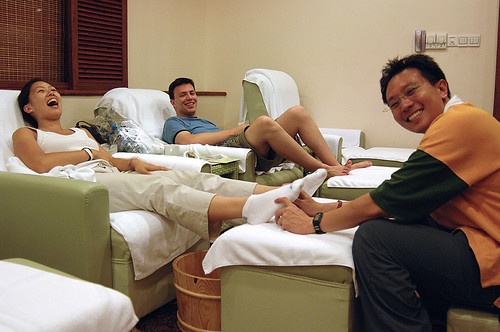 t turned out Celtic fireworks team were doing a firework display in Changsha (the Capital of Hunan), it was a shame we couldn’t go as we had already made plans to go to Beihai. Simon from Sirotechnics was good enough to do me a report of the firework display:

Over 50 weeks there will be a display held in Changsha China, not far from Liuyang, set to music allowing companies from around the world to compete for the prestigious title of Changsha Pyromusical Champions.

The displays are all set along the river bank stretching just over 3/4 of a mile wide. There are between 13 and 21 firing sites per display which consist of a front middle and back for slices, comets, candles and cakes stretched out along the frontage, slightly bigger than your average wedding fireworks show!

This year was the first year that international companies have been invited and it was the pleasure of a group of UK companies (Known as the Celtic Buying Group – the only UK entrant this year) to join together to provide a pyromusical feast for the Chinese to Enjoy. The choice of music included Take that – Greatest Day, Braveheart Theme Music, James Bond – Goldfinger and the National Anthem for the Finale. The concept was a display that took the Chinese viewers through a short history of the UK`s music but also around the UK through England, Ireland, Scotland and Wales.

This was a new experience to a UK team entering a pyromusical display. Here we start, continue and finish without any intervals – in China not so. This is why the display was split into sections so the show could be broken down to, as the Chinese say “tell a story”. After each song was completed the music would stop and a voice over the PA would translate our dialogue into Chinese to tell them about the significance of the music and where in the country they were about to be taken.

The display took approximately 4 days to set-up with just over 60 technicians working on site. The display consisted of over 3000 shells of a minimum 4” calibre ranging to 12”. There was more slices and single shots that I have ever seen before and stretched a good 300M down the warehouse, block by block!

When the final day came, the crew sat back and retired to a (HOT) Chinese meal with the judges and members of the fireworks consulate in China to discuss the weeks occurrences and what they were about to see. Then a tap came on the shoulder of Adam Hilary of Reaction Fireworks telling him it was time to move over to the other side of the river, he was joined by Mark Copland of Fireworx Scotland who was also to oversee the firing of the show from the display site. Mark and Adam were to be situated in a small Perspex hut in-between 2 of the central firing sites with the command desk and over 3 tonnes of pyrotechnic material around them exploding throughout the show.

Meanwhile, the rest of us sipped on the beer and awaited our time to be taken to the temple to watch the show. It was from here that the judges viewed the show and where the rest of the fireworks consulates were invited to see the show also – a VIP members only section if you will. The rest of the crew including Steven Allisson – Northern Lights Fireworks, Andy – Merlin Fireworks, Neil Burnham – Pyro1, Alan Christie – Skyburst, Peter Cooper – Selstar Fireworks, Simon Harding – Sirotechnics Fireworks Displays and their other crew grabbed a quick Chinese tea, set up the cameras and watched the show!

The show commenced with a huge lancework structure colour changing from red to green, this was approximately 100M across and about 5 metres in height. The scale was a sight to behold and was created using the new lancework rope that we use for bigger set-pieces. The message was that of a Chinese radio station that was broadcasting our show and music live from the firing site! They wanted some inclusion of China in our Show!

It would be fair to say that the weather was not quite on our side this time. There was a thick dense fog overhanging the entire river and show. It meant that some of the most beautiful 12” YungFeng Shells were almost entirely lost when the fog mixed with the smoke created from the fireworks.

We did, however, feel we had put on a great show for the Chinese to enjoy. The judge’s comments noted that in the face of terrible weather conditions we had done a great job at displaying our scene and message and they really enjoyed our UK style of show with the punctuation of the beats with comets and slices. Who knows the Celtic Buying Group may even be invited again next year to something even bigger… watch this space.

Ok enough reading….. here is the video of the finale!

Dubai is to hold another record-breaking celebration to welcome in 2023.Each year, Dubai utilizes their spectacular B...
Read More
Filed in: China Trip, china trip 2012, Epic Fireworks, Episode 7
Share:
Find us on Facebook Find us on Twitter Find us on Pinterest Find us on Instagram Find us on Tumblr Find us on Vimeo Find us on Youtube Find us on LinkedIn Find us on Flickr
Previous article INSTANTLY LIGHTING OVER 10 KILOS OF EPIC FIREWORKS