Thunderous Finale and Screaming Spiders are BACK 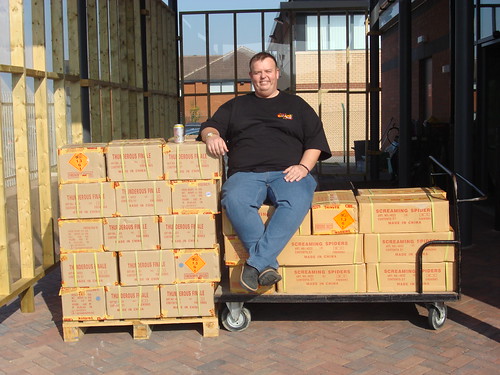 This year, we have brought plenty in to ensure that we don’t run out but this may be easier said than actually done but with the rest of the new additions to our already expansive range, I am absolutely certain that there will be something of note to suit every taste and pocket.

For the one or two of our readers that have not experienced the SS and TF (as they are affectionately called) then you are truly missing out on a couple of the best examples of 1.3g pyro in the UK.

The Thunderous for example offers huge volleys of 4 shots at a time scream into the air before breaking into phenomenally large coloured palms which overlap giving the effect of a multi-shell burst. The next 4 shots explode to produce electrifying clouds of crackles that absolutely fill the sky above you. Beautifully timed to create the perfect display, the sky is never empty with this monstrously powerful barrage. Culminating in a double 8 shot finale volley with silver crackling palms.

The Screaming Spiders is a two-stage mine with large reports breaking into the sky producing golden tails with willow effect bursts, massive jet screams, glittering confetti, crackling comet tails to tourbillions with blue peonies, dragon’s eggs and strobes to finish.

Thanks to constant improvements in firework manufacturing, and a thirst from importers to deliver the most impressive...
Read More
Filed in: Epic Fireworks, screaming spiders, Thunderous Finale
Share:
Find us on Facebook Find us on Twitter Find us on Pinterest Find us on Instagram Find us on Tumblr Find us on Vimeo Find us on Youtube Find us on LinkedIn Find us on Flickr
Previous article SOUTHEND’S FIREWORK DISPLAY IS TO MAKE A COMEBACK THIS YEAR!