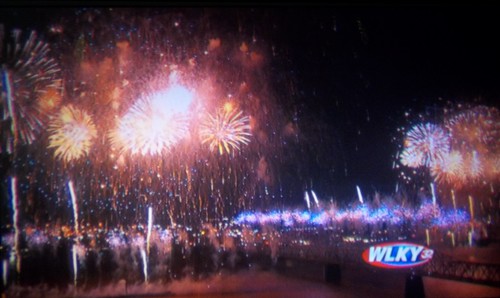 There is little more loved than a combination of things most of us know and love – TV theme and Fireworks. With some instantly recognisable themes like Seinfeld, Cheers and Friends, it would be difficult not to sing along.

The annual fireworks display is one of the largest of its kind in the USA and is said to set the scene for the forthcoming Derby Festival, the home of the world-famous Kentucky Derby.

The event, which began way back in 1990, uses an average of 25 tonnes of pyro which is laid out on multiple barges on the river as well as lining the banks and on the bridge which spans the beautiful Ohio River.

The fireworks this year are once again being handled by one of the firework industry’s forerunners, Zambelli International Fireworks own master pyrotechnician Ray Loffredo. No stranger to pyro-musical, Mr Loffredo and his team are world leaders in technical innovation and are responsible for some arguably the most beautiful displays in the World and they choreograph and create over 1600 shows annually to the delight of tens of thousands of people.

Zambelli Fireworks set up in business when they moved from their native Italy 120 years ago and they have never looked back.

The Thunder Over Louisville event was moved in 1991 and grew and grew. In 1997, they added an airshow into the mix and today, it remains one of the biggest events in the firework calendar.