Thrissur Pooram Festival Gets Under Way 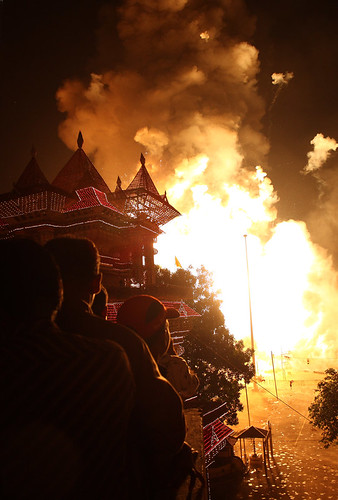 Kerala’s most spectacular elephant and fireworks festival Thrissur Pooram gets underway today with colourful pageants in temples around the city in India. Most of the celebrations will continue until the wee small hours.

The city always braces itself for the thousands of Pooram fans as processions converge from all the different districts of the city led by elephants and artists playing drums, pipes and cymbals. All of the elephants will be decorated with caparisons which are highly decorated golden coverings for the animals head.

Most temples in Southern India have their own elephants which have been donated by devotees of the Hindu faith. Almost all festivals in Kerala feature at least one highly decorated elephant.

The pooram will conclude with a sizeable firework display in spite of some restrictions being proposed for the noise levels as the area is supposed to be a silent one.

The Thrissur Pooram (mother of all temple festivals) was introduced over 100 years ago and continues to play a massive part in the faith’s celebrations annually.

'Madathil Varavu', one of the important ceremonies of the day, began at 11.30 am. The procession of the Paramekkavu temple (the biggest and most important in the area) began at 12.30 pm. The huge display of fireworks will be held on May 2nd at 3.00 am.

There is nothing more spectacular than watching a firework display which has been perfectly designed to music. That s...
Read More
Filed in: Fireworks, india, Kerala, Thrissur Pooram
Share:
Find us on Facebook Find us on Twitter Find us on Pinterest Find us on Instagram Find us on Tumblr Find us on Vimeo Find us on Youtube Find us on LinkedIn Find us on Flickr
Previous article SOUTHEND’S FIREWORK DISPLAY IS TO MAKE A COMEBACK THIS YEAR!