The Thrissur Pooram Festival has been celebrated for more than 200 years and it is regarded as the biggest and best temple festival in the whole of India. Legend has it that the city of Kerala was created shortly after the Vadakkumanathan Temple, which is the largest Hindu Temple the area, built in 1795 by Lord Parasurama. The temple holds 2 major and 8 minor temples within its control.

The festival brings together traditional Indian spirituality to the people and there is lots to eat, drink and of course see and hear at this magical and highly colourful peek into Indian life.

Whilst this is today the biggest event of its kind in India, it is not the oldest as the Arattupuzha Pooram has held religious celebrations for almost 1500 years.

The event lasts around 36 hours in total (these people really know how to party) and starts from 6am on the morning of the 26th and runs through until mid-day the following day. The fireworks, in our opinion the highlight of the event, are usually held in the early hours of the morning and the East and West Temples each try to outdo the other on the amount of the pyro used. Bearing in mind that the fireworks last from around 3am to 6am there is 3 hours of mayhem.

Whilst it is a predominantly Hindu festival, participants from all religious backgrounds, economic and social status come together to celebrate the harvest of their autumnal goodies. Visitors (foreigners) have a special seating area which gives them a better view as the crowds are literally shoulder to shoulder which can be quite disturbing and of course, it is 32 - 36 degrees centigrade which is a skin melting 89.6 – 96.8 degrees Fahrenheit means it is hot as hell too.

The event starts at 4am with prayers before the flag hoisting at each of the temples within the Pooram and then, visitors can check out the pyro which is going to be used in the early hours of the morning.

Of course, as well as the fabulous fireworks, people gather from across India to see the beautifully caparisoned elephants in their splendid golden head-dresses, the people on the backs of the elephants with decorative parasols and all accompanied by up to 200 musicians. One of the oldest elephants at the temple is 82 years old and the vast majority of temple elephants all come from the biggest elephant house in India which is in the Thrissur District of Kerala. The parades – one from the East and the other from the West of the City merge together in the centre, much to the delight of the gathered tens of thousands of locals and international visitors.

When is comes to fireworks, Indians have their own set of health and safety standards which are steadily improving, but still have a long way to go. In preparation, they do not have mortar tubes but dig 4-inch holes in the ground and then drop the salutes into these. The fields were once full of rice which has recently been harvested so it is a good time to get some fun into proceedings before the next planting stage. 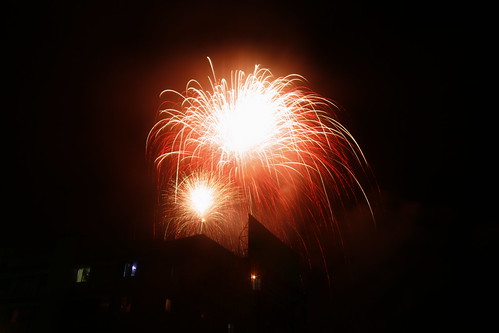 The salutes are row upon row and are linked by quick match and lines of black powder. Although not as precise as an electronically fired display, they can certainly match the cadence of the drums and musical accompaniment. Beautiful.

If you should get the opportunity to go along to the event, I am sure that it will be something that you remember forever.

Thanks to constant improvements in firework manufacturing, and a thirst from importers to deliver the most impressive...
Read More
Filed in: 2018, Thrissur Pooram, THRISSUR POORAM 2018
Share:
Find us on Facebook Find us on Twitter Find us on Pinterest Find us on Instagram Find us on Tumblr Find us on Vimeo Find us on Youtube Find us on LinkedIn Find us on Flickr
Previous article TONEGAWA FIREWORKS FESTIVAL 2022