The Yenshui Beehive Fireworks Festival is a popular event in the town of Yenshui, Taiwan. 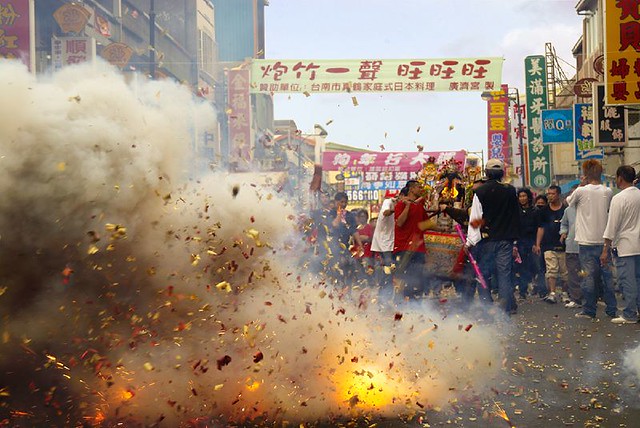 The festival dates back to the late 1800s when the area was blighted by a severe epidemic of cholera, the traditional customs of the time stated that the best way to prevent the cholera outbreak, and protect the villagers, was to parade the streets with a statue of legendary folk hero Kuanyu raised on a palanquin (what’s a palanquin, I hear you ask, well “a passenger conveyance, usually for one person, consisting of a covered or boxlike litter carried by means of poles resting on the shoulders of several men.” of course, duh), setting off firecrackers and warding off the evil spirits responsible for spreading the disease. Kuanyu was a heroic figure in Chinese history from the 3rd century who has through the years become something of a saint to some of the peoples there.

Nowadays, the memory of this festival is kept alive with parades through the streets by a hundred martial arts teams and of course the obligatory thousands of fireworks. The festival has grown from a local tradition into a great tourist attraction bringing in visitors from around the world to see the famed palanquin (remember the description above?) and the statue of Kuanyu. Oh yeah, and the fireworks aren’t bad either. The fireworks are certainly still the highlight of the show however they are being closely followed by a spectacular lantern festival which sees the sky full and illuminated by the sight of the beautiful flying lanterns in the air, this is made even more special by the ignition of specially made stacks of fireworks in the shapes of chariots, golden ingots and giant teapots, all culturally significant items.

It is recommended that visitors see the exhibitions featuring sculpture, teapot designs and performing arts by local artists being held in the neighbourhood of the Kuanyu Temple while appreciating the fun of folk customs. And don’t forget the fireworks!!