Some of you may have seen the recent video titled 'Building World's Tallest Bonfire' on either TikTok or LADbibles Facebook feed.

The video shows how, in Alesund a town of Norway, a group of 30 to 40 people build a monstrous 40.45 metre high bonfire in order to usher in the Sun. Lit on June 26th, five days after the Summer Solstice, the celebration known as Slinningsbalet marks the sinking flame of the Sun.

Wooden crates are delivered by boat to a small island which is conveniently surrounded by the ocean, ideal for when the towering inferno decides to collapse. Lit during a lighter Summers evening, daytime fireworks are fired alongside the burning mass and both loud titanium salutes and coloured smoke provide an exciting spectacle.

The end of the video mentions how the people of Alesund will have to wait and see if they once again achieve a World record. Curious, we decided to research the topic.

It turns out that Norway held a record in 1993 for a bonfire which stood 37.84 metres tall and in 2010 beat this record with a structure which towered to heights of 40.45 metres.

Now things get interesting! The actual 'World's Tallest Bonfire' dwarfs the efforts of Norway and in Lustenau, a town of Austria, they hold a Guinness World Record for having built a bonfire that stood 60.64 metres tall!

The structure, which now took 3 months to build and was made of hand-shaped interlocking logs, burned to the ground in less than half an hour. Part of a tradition called Funken, (which translates to 'sparks'), the ceremony dates back to pagan times and is intended to banish Winter whilst marking the arrival of Spring.

With the Austrian bonfire built using cranes, and other heavy machinery, Norway can feel smug knowing they have the largest hand-built bonfire yet the town of Lustenau hold the official tallest bonfire World record, and by quite a margin too! 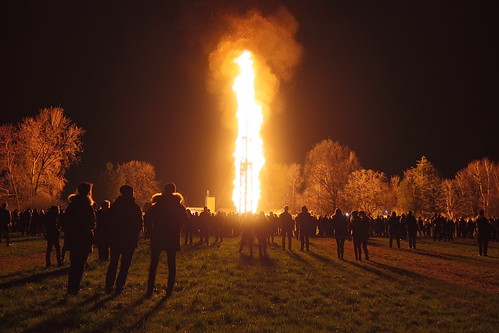