THE WORLDS MOST DANGEROUS FIREWORK FESTIVAL

WHAT: THE WORLD’S MOST DANGEROUS FIREWORK FESTIVAL
WHY: PYROTECHNIC BASED CELEBRATION
WHEN: SUNDAY 21st FEBRUARY AND MONDAY 22nd FEBRUARY 2016
WHERE: YANSHUI DISTRICT, TAINAN, TAIWAN

As amble along in the Yanshui district of Tainan, in South-west Taiwan, on the 21st or 22nd of February this year, you may be forgiven for thinking you have somehow been transported to a distant planet, as strangely dressed people mill around. They are wearing everything from homemade space helmets, tin hats and motorcycle headgear throng around covered from head to foot in a mish-mash of protective clothing, scavenged from junkyards or thrift shops, thick gloves and fire-retardant scarves hiding the faces of the adrenalin filled well wishes.

A raucous group of horn players strike up as statues of the Chinese god of war Guan Gong carried along in sedan chairs make their way through the crowds, behind the excited onlookers stand the “Bee hives”, standing four metres in height they are then wheeled into position. The bee hives, made entirely from pine, are actually launching stations for small rockets. Densely packed, some contain up to 600,000 tightly wound cardboard tubes with small directional sticks attached filled with black powder they whiz and dart around the crowds - being hit by one of these will, it is believed, bring you good luck.

Last year the two most popular bee hives built by Shen-Chi Chung and his family were modelled on the animated character; SpongeBob SquarePants and a huge pirate ship over eight metres in height, boasting around 45,000 rockets incorporated into the designs. 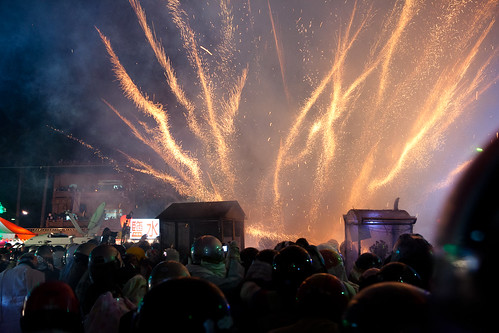 Costing around £12,000 each and taking around a month to build there are certain rules that have to be followed, the most important of which is that any woman may work on the structures as long as they are not pregnant, and any men wanting to participate must pray to Guan Gong three years in a row before they are allowed to assist with the building of the bee hives.

The first night is more of a local affair where the second night is mainly for the tourists, visiting officials and those not wearing protective clothing have the option to stand behind a 20 x 50 metre wire mesh screen.

The festival started in the late 19th century to combat cholera and the plague, Yanshui at the time was a very important port due to its location on the then busy canal system, the diseases had ravaged the area for two decades until a shaman summoned the god Guan Gong to dispel the evil, the deity agreed to attend as long as there was fireworks, in reality the sulphur from the fireworks killed the cholera’s bacteria the loud noise scared away the rats carrying the plague saving the city.

The Festival Director; Lin Yi-Ren, remembers back when as a child they used to hold the rocket sticks, letting them blast off from their fingertips and run around without any protection at all.

Although Taiwan recently suffered an earthquake of 6.4 which stuck 17 miles north of Pingtung City, the festivals organisers say it will still go ahead. 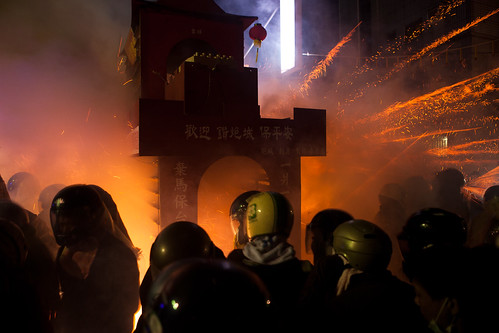 WHAT: THUNDER OVER LOUISVILLE 2023WHY: FIREWORKS AND AIRSHOW EVENTWHEN: SATURDAY 22nd APRIL 2023WHERE: LOUISVILLE, KE...
Read More
Filed in: fireworks festival, Tainan, Taiwan, Yanshui District
Share:
Find us on Facebook Find us on Twitter Find us on Pinterest Find us on Instagram Find us on Tumblr Find us on Vimeo Find us on Youtube Find us on LinkedIn Find us on Flickr
Previous article SOUTHEND’S FIREWORK DISPLAY IS TO MAKE A COMEBACK THIS YEAR!