THE SCIENCE BEHIND ... FANTASTIC FIREWORKS! 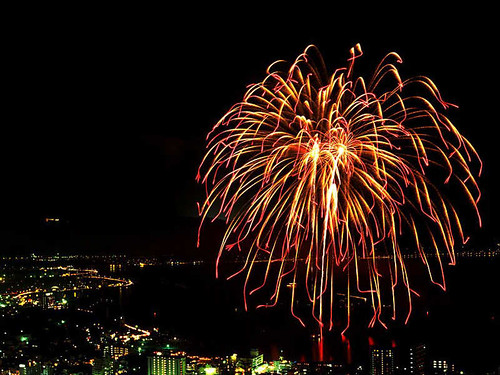 Fireworks always make the Bonfire party go with a bang, as a crowd of spectators stare up at the sky following every explosion with either an “ooooh” or an “ahhhh” - but have you ever stopped to wonder about the science behind the spectacle?

How are Fireworks made? There are many different kinds of fireworks but they are all made in pretty much the same way. A simple firework consists of a tube containing small explosives packed in a type of gunpowder called black powder. The black powder is known as the lift charge. A piece of treated string, called a fuse, sits in the black powder and sticks out of the top of the tube. The fuse is lit to ignite the firework. Remember, you must NEVER take a firework apart.

Colourful Chemistry Firework explosives are made from chemicals. Here’s a list of some of the chemicals that are used and the colours and the effects they make.

Did you know? Gunpowder was discovered by the Chinese in around the 1000s. It is believed that, while cooking, someone accidentally dropped a mixture of saltpetre, charcoal and sulphur onto a fire. It produced a loud bang. After further experimentation, the gunpowder was packed into bamboo shoots and set alight to produce explosions, which were thought to scare away evil spirits.

Sparklers - Sparklers are long pieces of wire. Half the length of the wire is covered in chemicals that give off bright sparkles of light when lit. The sparks burn off at 898°C. Three sparklers burning together generate the same heat as a blow-torch so they are very dangerous. Each year during this time, sparklers cause the most injuries, so if your parents let you hold a sparkler you should always wear gloves and be really careful.

So what causes Fireworks to explode? An explosion is caused by very fast burning. Super-hot gases push out at speed in all directions, forcing the air out-of-the-way and causing a shock wave that you hear as a bang.