The River Rhine In Flames. Spectacular Fireworks Over The Longest River In Germany. 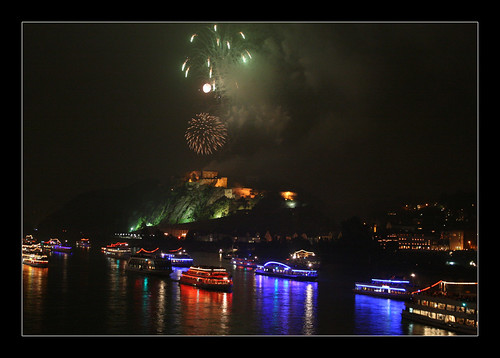 This Saturday 7th May 2011, the annual summer season of professional firework displays over Germany's river Rhine begins, offering the spectacular chance to see the River Rhine as you have never ever seen before - The Rhine In Flames

On five magical summer nights, an ever-changing kaleidoscope of bright coloured lights spews above the river Rhine and shimmering cascades of a colour plunge into the romantic Rhine valley. Nowhere else in Germany can you see a more impressive display of fire, water and light. 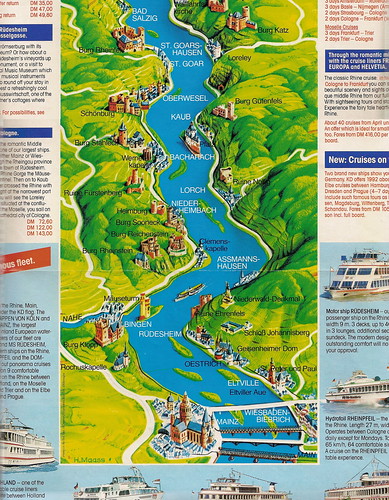 A huge fleet of 60 dazzlingly decorated ships cruises down the Rhine river between Linz and Bonn, their way illuminated by the intense glow of more than 2000 Bengal lights - a long-lasting flare.

The vessels sail through the Siebengebirge hills and the towns of Remagen, Bad Honnef and Königswinter - all of which perform their own festivals, dance celebrations and firework displays.

Some of Germany's most beautiful churches and castles come under the spotlight on this night as further dramatic firework displays throw light on an another treasured spot along the Rhine river.

A flotilla of boats congregates in the river between Bingen and Rüdesheim, one of the most picturesque towns in Germany with its bar-lined Drosselgasse and narrow cobblestone streets.

High and above the towns and the surrounding vineyards, the Niederwald Monument, a huge statue of Germania, basks in multi-coloured glory and looks on approvingly.

This is for most people is the most stunning of all the Rhine in Flames events and the one from which all the other events have drawn inspiration.

Koblenz claims to have staged the very first such celebration along the river when, in the summer of 1766, a firework show was put on in honour of Johann Phillip von Walderdorff, the prince elector.

Nowadays, the night's activities focus on an 80 strong fleet that sails 10 miles along the Rhine from Spay to Koblenz, via the towns of Braubach, Brey, Rhens and Lahnstein.

An estimated half a million people line the beaches to witness at least eight firework displays while a further 30,000 watch from boats and barges.

The highlight of the evening comes at 11pm when the ships reach the German Corner in Koblenz, where the Rhine meets the Mosel, and the vast Ehrenbreitstein fortress appears to be set ablaze with Bengal lights.

This performance is for those who enjoy a little music with their fireworks.

Another fleet of 50 ships travel 4 miles from the towns of St Goar to Oberwesel (known for its excellent wine and well preserved medieval towers). On the way, it passes the legendary Loreley rock which soars some 120 metres above the waterline.

The ending ceremony features a peerless 'Symphony of Fire', a fireworks display synchronised to music.

Although there is something sad about the Loreley legend - of a beautiful girl who sat on a rock combing her blonde hair and is accused of maliciously bewitching men and driving them to ruin, later she passes and climbs the Loreley rock, watching out for the lover who abandoned her, and falls to her death - this is one of the most romantic spots in Germany and a suitable setting for a climax to the Rhine in Flames season.

The fireworks here light up the skies and the ancient castle ruins in the precipitous Rhine gorge close to the Loreley rock at the deepest and narrowest point of the river.

This amazing spectacle can be viewed from the cruise ships on the river itself. Or, visitors can enjoy further firework displays and the wine festival atmosphere of nearby St Goar, St Goarshausen and Oberwesel. 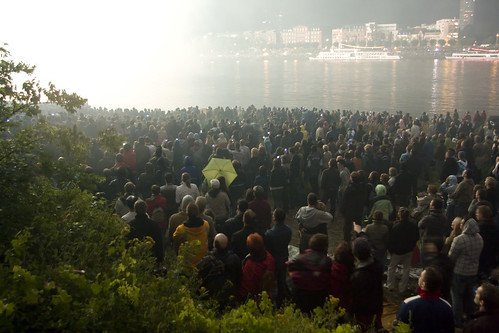