THE RISE OF THE FIREWORK CAKE

We may be surprised to know that the Roman Candle Barrage (RCB) or ‘Cake’ as it’s more commonly known is quite a recent addition to the firework World. As the name suggests a RCB is a series of roman candle tubes fixed together to form a multi-shot barrage. It was designed to give a longer lasting firework, plus a chance to offer a combination of different effects.

The first official ‘cake’ was imported by Esco fireworks for the UK market in 1985 and was called ‘News Transmitter’ producing an effect of silver whistling tails. 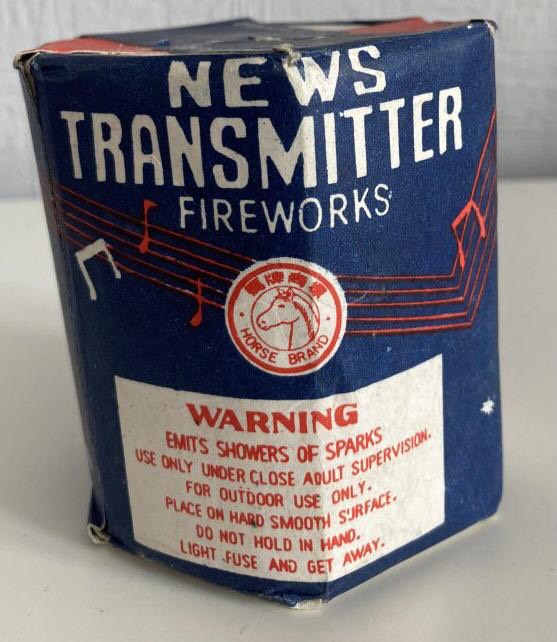 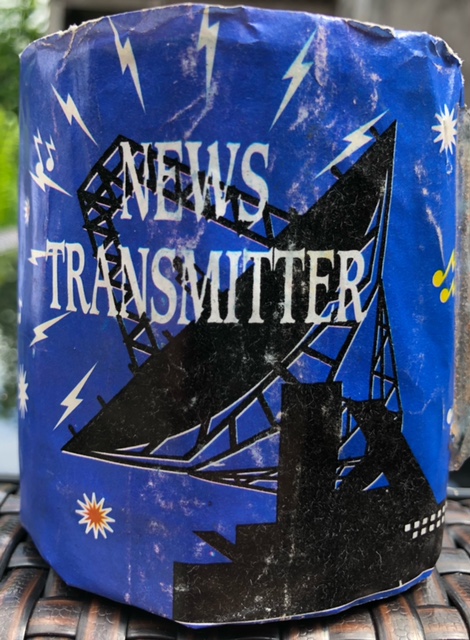 Following the success of the News Transmitter and other early imported cakes from China, a host of new Firework companies emerged alongside the existing leading UK Firework brands of the time in the early 1990’s. Many of these companies quickly capitalised on the ever-growing popular Chinese market in designing bigger and more elaborate fireworks, effects of which had only ever previously been seen in professional shows. 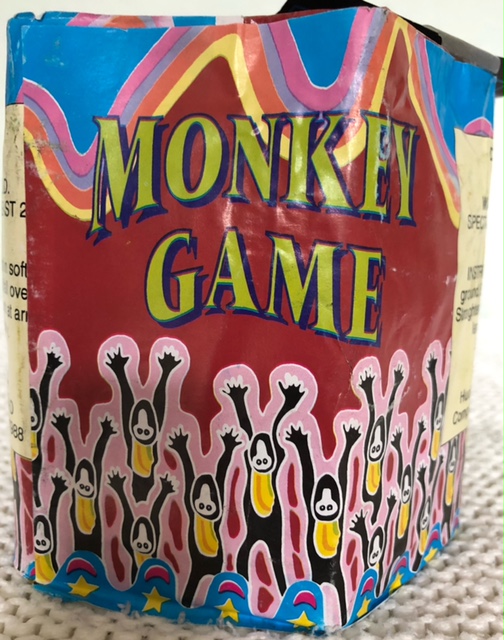 Many of these early cakes had some very unusual and convoluted artwork. 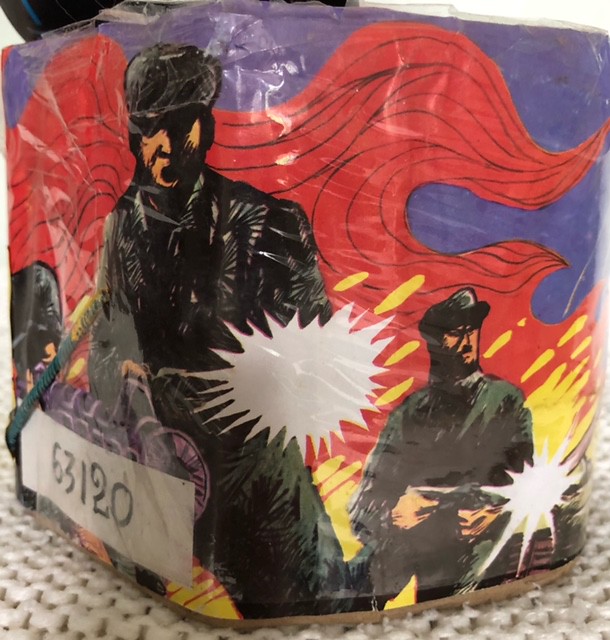 Thundering Stars which depict war artwork, Monkey Game and Jinsepubu.These two are other cakes that Standard later produced under their name. 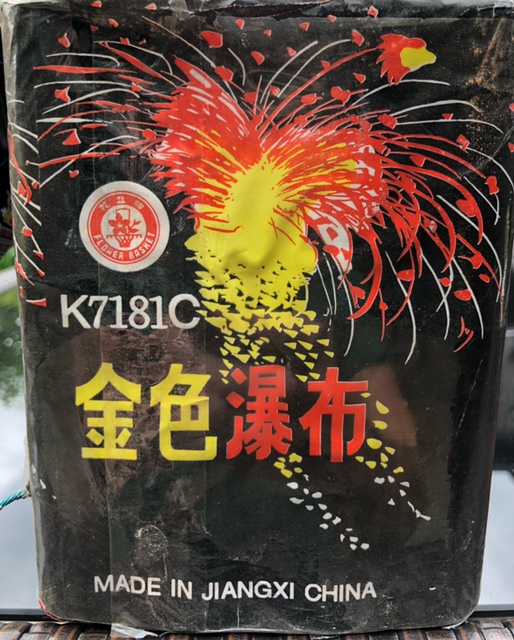 By the mid 90’s with the industry changing fast, the World-famous Chinese manufacture Black Cat fireworks had quickly established themselves as one of the leading brands within the UK, after first arriving here in 1993. It’s not surprising when the company came up with quality lines such as Crackling Golden Palms, Silver Spirals and Green Bamboo. 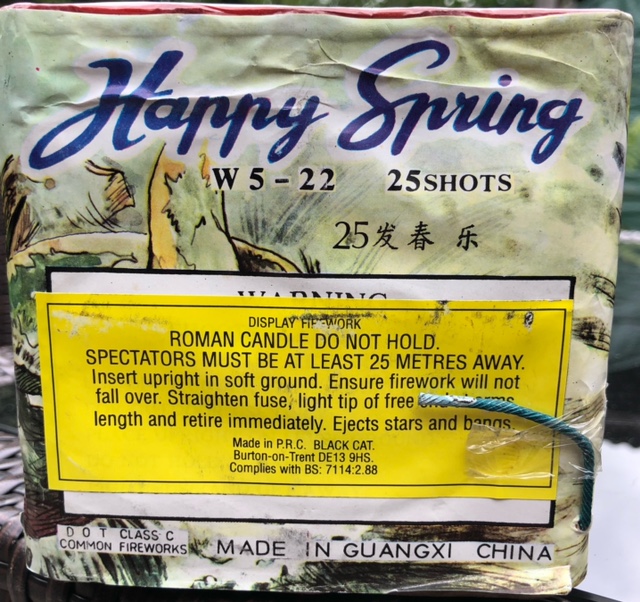 Notes: Anything but ‘Happy Spring’ with this early 1990’s imported Black Cat label. It perhaps should have been called ‘Man fights off ferocious Shark with pitch fork!’ The front label is merely a sticker put over the original label, which the importer had to do to state it complies with our BS regs. 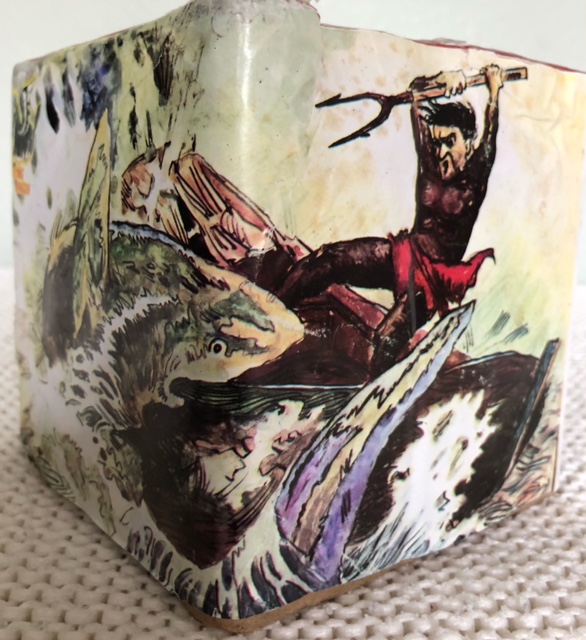 The 1990’s had seen the Firework industry literally shaken from head to toe, with increasing amounts being made in China, and by the late 90’s the industry was almost unrecognisable from the start of the decade, with the once flourishing British blue touch market now virtually extinct.

This however didn’t halt progress, so with the emphasis very much on ‘bigger and better’ fireworks the Cake had very quickly become (alongside the humble rocket) the nation’s favourite. It being accessible to a whole host of people including organised amateur shows for pubs, clubs etc in wanting to replicate as close to a professional show as possible, but at a fraction of the cost. it was the ‘must have’ firework in any show.

By 1999 the industry was seeing an unprecedented rise in sales, no doubt helped by the efficiency of the Chinese manufacturing factories and cakes being a major part of that. It was also the first real year where the industry had not only Bonfire night to think about, but we had the new Millennium fast approaching…What better way to celebrate and bring in the year 2000 than a firework show. However, when it’s cold, pitch black and in the depths of winter, setting up a load of fireworks is not to everyone’s taste. The cake was the perfect answer to this, one fuse and 30 seconds or so of effects and noise. However as this was a momentous occasion, something extra special was required. Maybe something that would last over a minute from one fuse and literally give you a display in a box…The arrival of the SIB (single ignition barrage in a box) was born…

1. Green Bamboo (Black Cat Fireworks) First produced 1997. One firework that still appears in many people’s all-time favourite list is Green Bamboo…nearly 25 years later after it was first produced. 25 shots that explode out in a silver trail, crackle, and an explosion of intense green stars. A top of the range noisy product and great finale piece back in the day! 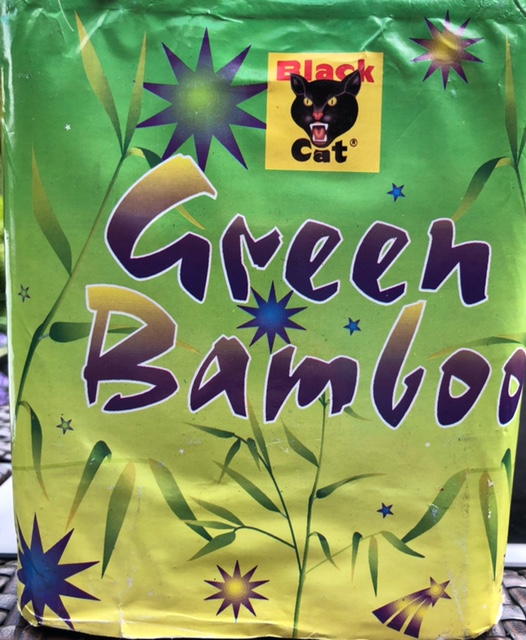 2. The Return of Hale Bop (Black Cat Fireworks) First produced 1998. Another fine piece of marketing from Black Cat, plus another that appears in many all-time favourite lists. Often paired with Green Bamboo as a joint finale, it produced 16 large whistling tailed shots with a fabulous exploding starburst. 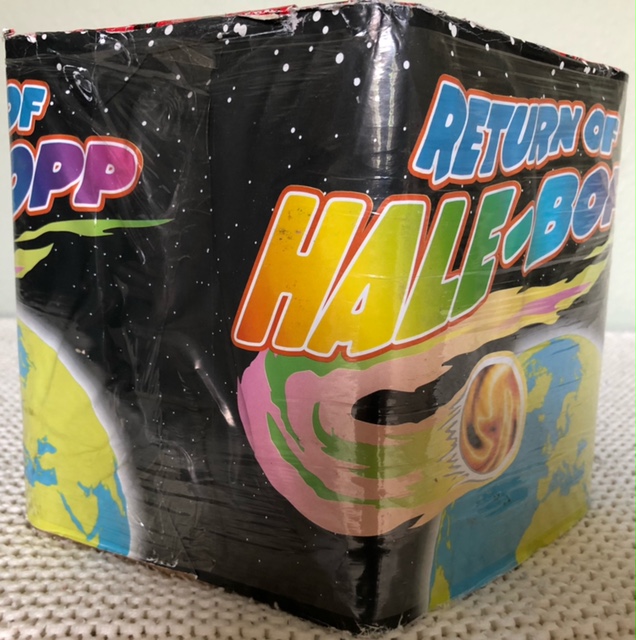 3. Glitter Blitz, Cluster Bomb, Naval Bombard (Standard Fireworks) First produced 1995. Ok slight cheat here, although these three large bore fireworks were often sold together as an ‘Oriental’ selection pack. The launch of these three with their strong Military theme was without doubt to celebrate pure noise. All three often featuring in the loudest fireworks discussions. Standard themselves described them as three salvos that produce seven shot bombs which will reverberate around the audience! 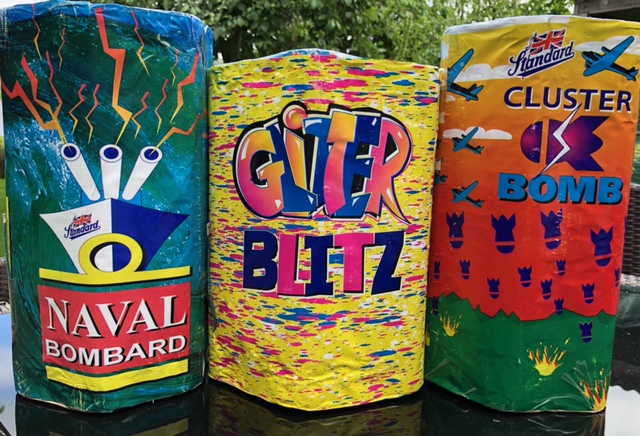 4. Star Bombard (Cosmic Fireworks) First produced 1999. Another incredibly loud piece that was only produced for around 3 years. It’s basically 3 x 3” tubes with pre-loaded mine shells that produced loud whistles and not surprisingly loud bangs!

5. Sky Monkey with Exploding Coconuts (Golden Lion Fireworks) First produced 1998. Could be a somewhat erratic performer with stories of its coconuts flying over people heads! However always an extremely popular and amusing addition to any show with its mixture of whistles, pops, and bangs. 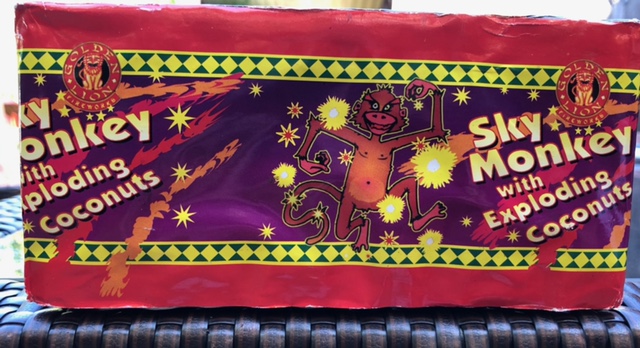 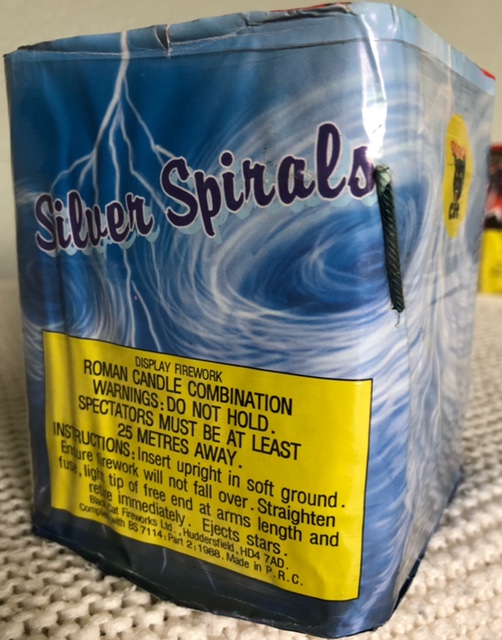 7. Imperial Salute (Golden Lion Fireworks) First produced 1997. This large cake could also qualify as one of the very first SIB’s (Single Ignition barrage). 40 shots of multi-series effects with a spectacular finale mix of palm breaks and salutes. No doubt a revolutionary piece of its time. 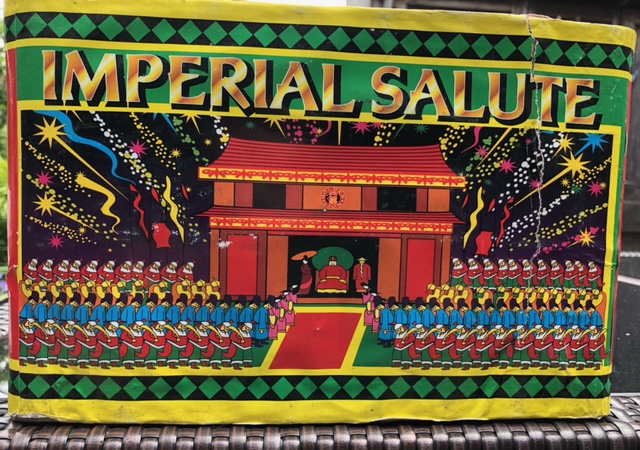 8. Gold Bees (Kimbolton Fireworks) First produced 1995. As the name suggests a lovely sedate, relaxing, and colourful piece. Producing 19 large bore shots of swarming golden bees to a wriggling fish effect. Simply stunning and one of the first of its kind on the market. 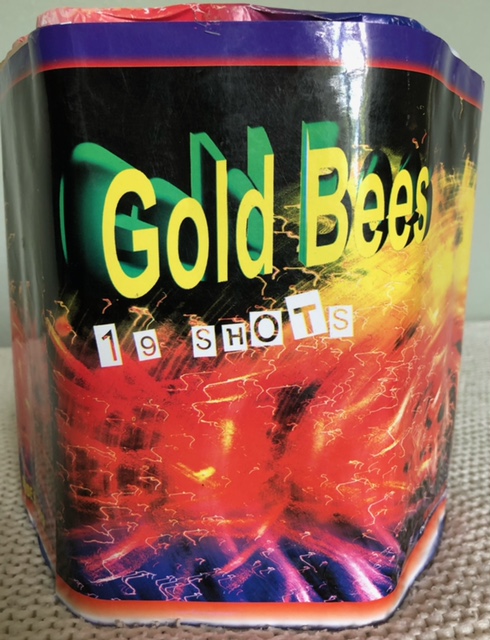 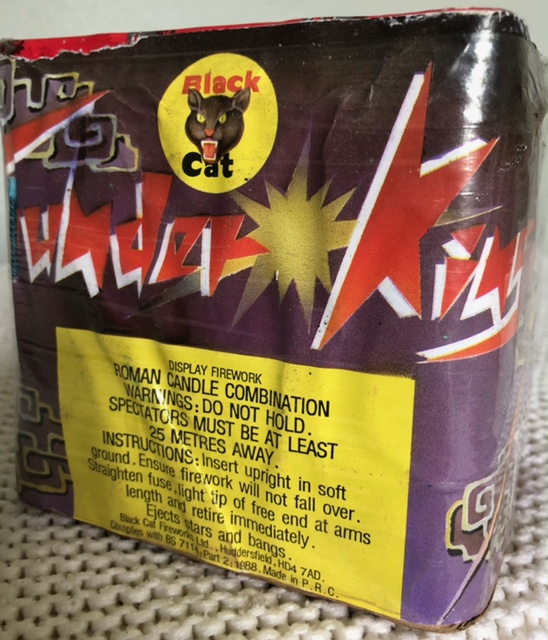 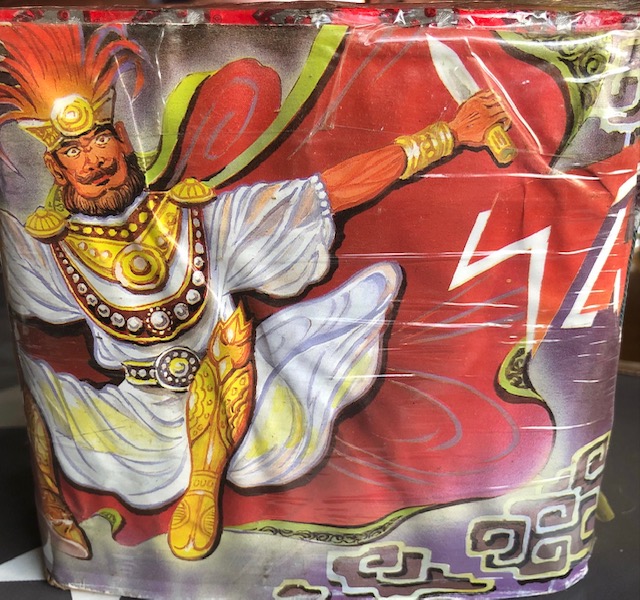 10. Pluto’s Moons (Cosmic Fireworks) First produced 1999. Once a Supermarket favourite, this little beauty had a long duration with some lovely vivid blue stars and silver strobes. 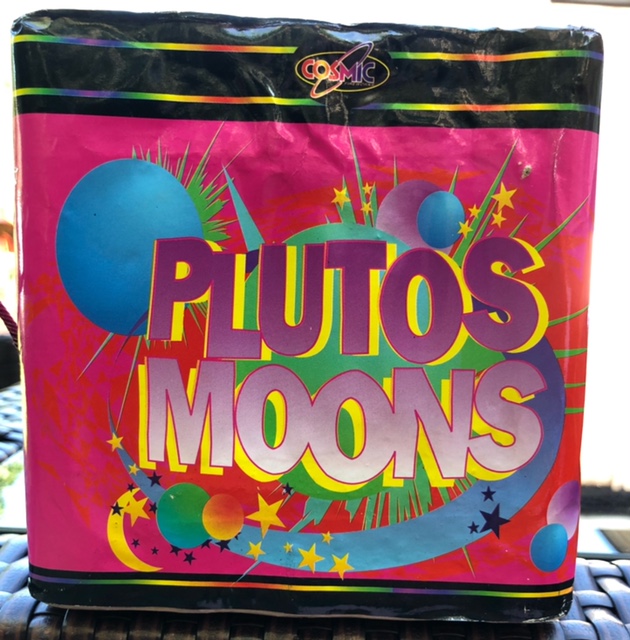 TAMWORTH FIREWORK DISPLAY BACK WITH A BANG

THE HISTORY OF SKY LANTERNS

Sky Lanterns originated in China an incredible 2000 years ago and although the delicate floating lights are now assoc...
Read More
Filed in: 1990's, FIREWORK CAKE, RISE OF THE FIREWORK CAKE
Share:
Find us on Facebook Find us on Twitter Find us on Pinterest Find us on Instagram Find us on Tumblr Find us on Vimeo Find us on Youtube Find us on LinkedIn Find us on Flickr
Previous article 2021 TOP 10 LOW NOISE FIREWORKS
Next article TOP 5 BESTSELLING ROCKETS